The Posters Brothers: the Life and Work of the Stenbergs

The Stenberg brothers — Vladimir and Georgii (both G’s pronounced hard, like in “guess”) — are among the most celebrated names of early Soviet design, with a varied artistic output that runs the gamut from sculpture and architecture to theater decorations and movie posters.

Born to a Swedish father and a Latvian mother, the brothers functioned like a pair of twins, despite an age difference of a year and a half (Vladimir was born in April 1899; Georgii, in October 1900). The duo studied and later worked in tandem, signing all their creations in the style of a circus double act: “2-STENBERG-2“.

Sadly, Georgii died young in a motorcycle accident. Vladimir outlived his younger brother by half a century and found a measure of individual success as the Chief Designer for Moscow’s Red Square. (Among other things, he was responsible for masking the Moscow city center from Nazi attacks during World War II.) However, his solo work is less celebrated than his early collaborations; in death as in life, the brothers are considered a single creative entity.

The pair designed anything and everything from women’s shoes to railroad carriages, but they are primarily remembered for their vibrant, revolutionary work in the field of movie posters. In their short stint as in-house designers at Sovkino (a government entity responsible for film production and distribution, superseded by the State Committee for Cinematography), the Stenbergs gave birth to some 300 memorable posters for both Soviet and foreign films.

The posters, while very individual, all adhere to the same set of distinct design choices. Here’s a rundown of the four pillars of the Stenbergs’ movie posters, to inspire you in your own artistic practice.

“Bold” and “dynamic” are how most people would describe the Stenbergs’ posters. The brothers were big fans of symmetry — their designs are full of visual rhymes — but they also always knew how to inject life and movement into their work.

The Stenbergs relied on the use of diagonals and concentric circles in order to lead the viewer’s eye to the poster’s focal point (often nowhere near the actual center of the composition). The examples below showcase some of their favorite layouts: 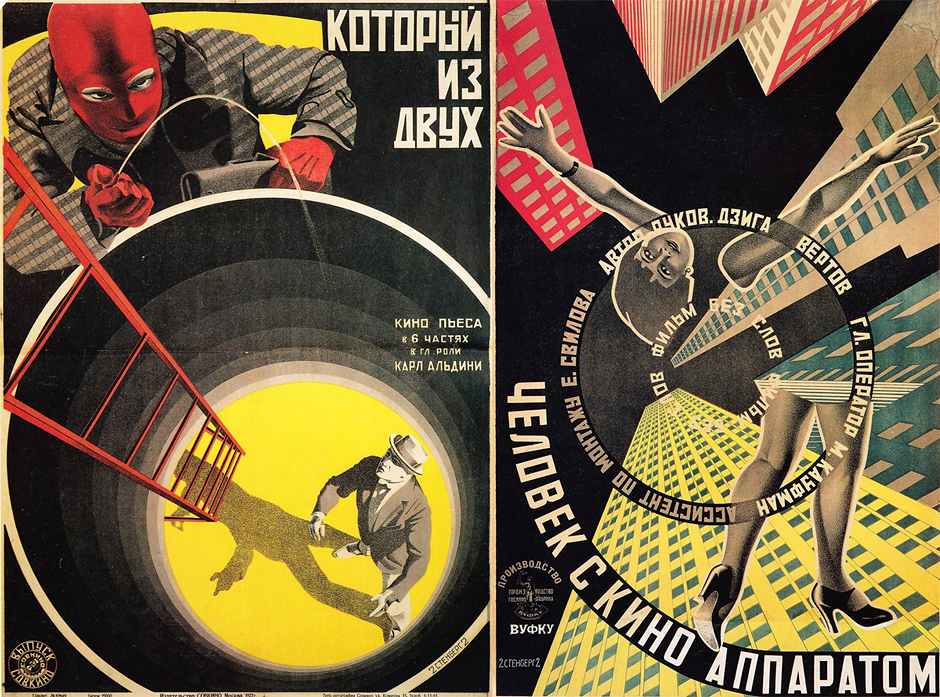 (left: The Battle Against Berlin; right: Man with a Movie Camera) 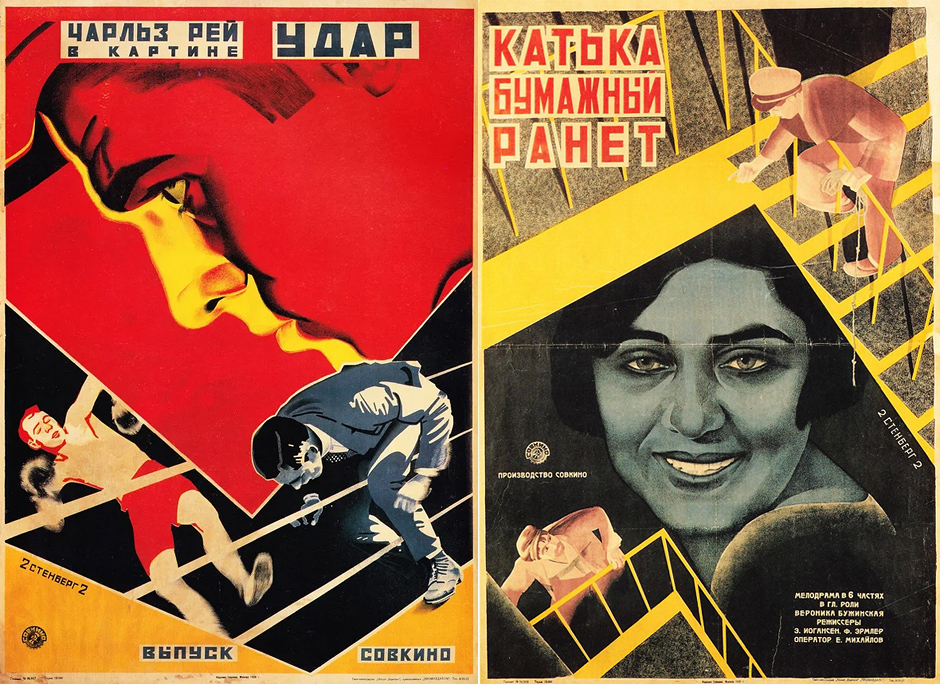 The Stenbergs were true cinefiles, finely attuned to the grammar of movies. They learned to translate film techniques into the language of graphic design, which led to their posters featuring an abundance of radical closeups, distorted proportions and expressive lighting. 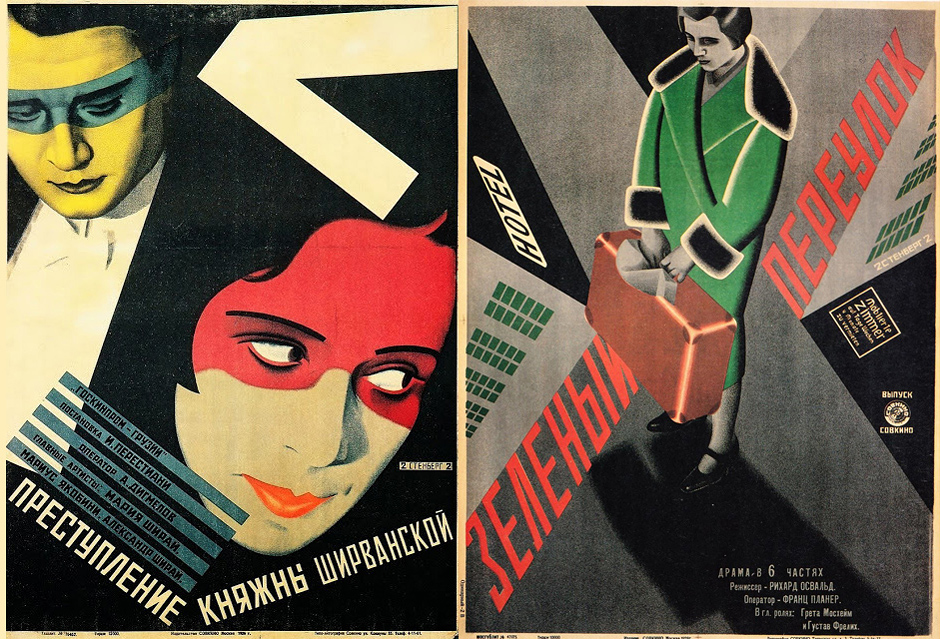 (left: The Crime of Princess Shirvanskaia; right: The Green Alley)

The brothers’ experiments with scope and perspective lend their posters a bold, dramatic flair. The Stenbergs themselves explained it best: “We handle the material freely: we do not respect proportions, we turn the figures upside down — we will use anything to catch the attention of a hurrying passer-by.”

In yet another imitation of film editing techniques, the brothers took to assemblages and collages. The Stenbergs’ work is a seamless marriage of realistic elements and geometric abstraction. Their secret? What looks like photomontage is, in reality, illustration masquerading as collage.

The Stenbergs projected filmstrips onto their posters and then copied, distorted and embellished bodies and faces, giving the posters their distinctive look, somewhere in the twilight zone between cartoon and photorealism. Most importantly, this technique allowed the brothers to circumvent the printing limitations of the time and gave their posters a quality that would have been impossible to achieve via photographic means. Very punk rock! 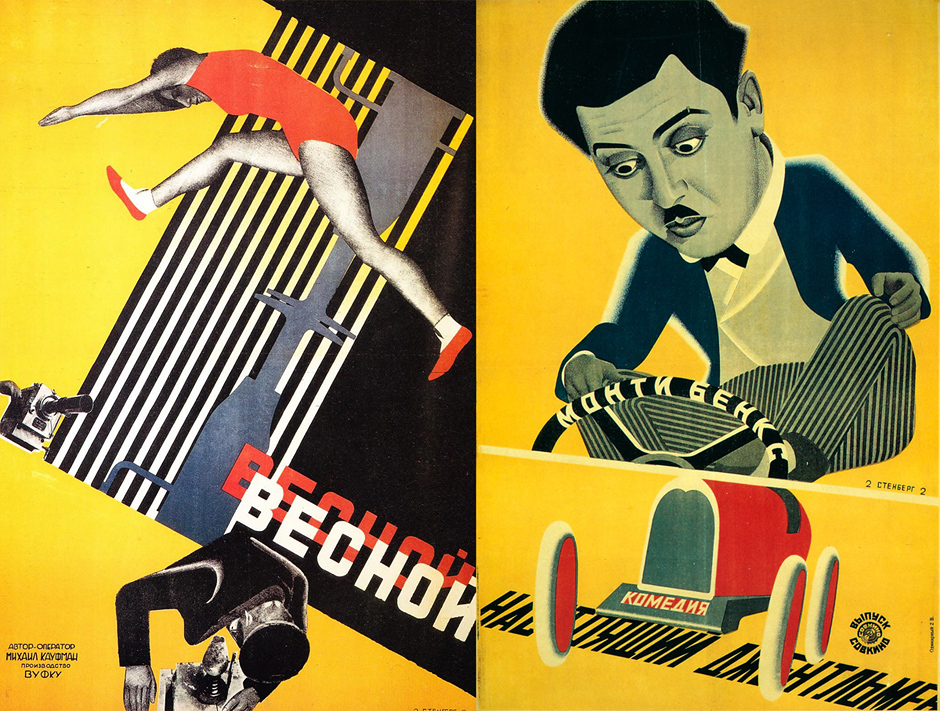 In the era of black and white cinema, the poster would determine the colors associated with the movie it was promoting. In general, early Soviet design was characterized by a very lanonic relationship with hues; however, even within these constraints, the Stenbergs utilized the color with their trademark audacity. This was further supplemented and enhanced by inventive use of type; the seemingly staid, blocky sans serifs — typical for Constructivist designs — became fun and playful in their talented hands. 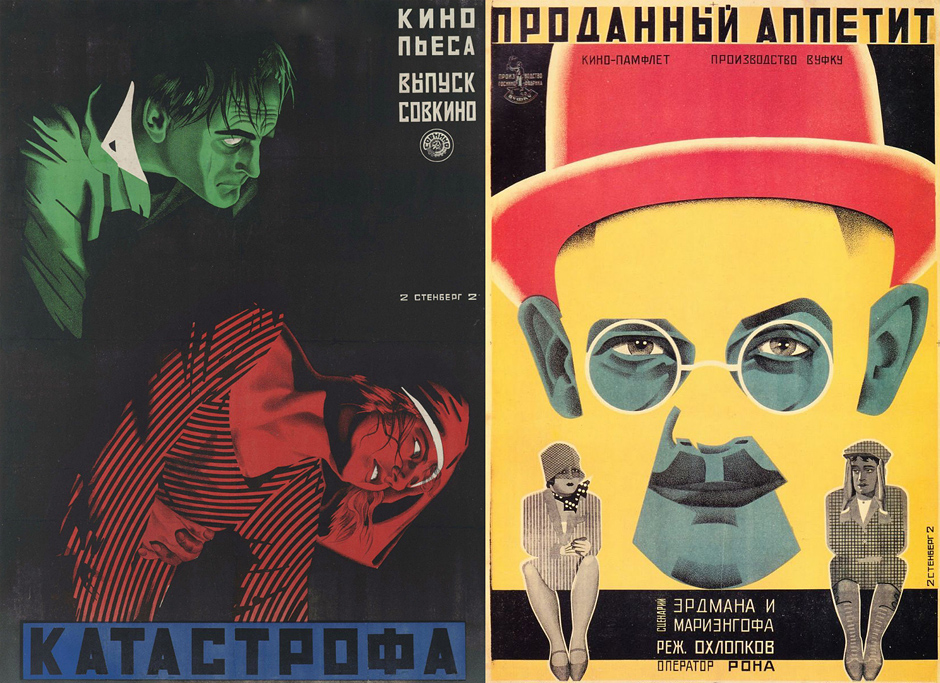 So what’s the main takeaway here? That perfect partnerships exist? That technical limitations breed ingenuity? That a recognizable personal style can blossom even in rigid studio environments? Whatever conclusions you draw, one thing is for certain: like the Stenbergs, we could all do with a little extra bit of boldness in our work.