I missed Star Wars when it came out in ’77, my sister went with our friends and I found out the day after that they had snuck out after I had been frog marched to bed and locked in a cupboard with only a questionable biscuit for sustenance……… Okay so that may be bending the truth a little bit but I had missed one of the cinematic events of a generation.

I as I grew I became fascinated with the process of how these wonderful pieces of art were made, particularly the visual effects and I would read everything I could to educate myself and answer the question “how on earth did they do that?”

My love for film never waned over the years, and after finally getting to see Star Wars I did everything I could to see everything….well everything.

Over the next twenty years I would see absolutely anything, if I missed it at the cinema I’d be first in line at the video store.

In the 90’s I spent a bit of time in Hong Kong and soon realised, at that time, certain films were released a little bit earlier than UK, yay!!! With that came access to reasonably priced laser disc players, my first foray into ‘almost HD’, heady days….

It was whilst in Hong Kong that Jurassic Park was released and I was party to another phase in cinematic history…T-Rex paddock fun, double yay. Little did I know it at the time in that little theatre in Yuen Long (amongst the wonderful odours of the cinema snack of choice over there, “fish on stick’) that Spielberg had made the revolutionary but time consuming decision to move from ‘Go-Motion’ to CGI, I coulda kissed him, he’d remembered his producing experience on Levinsons “Young Sherlock Holmes” in ’85 and the use of ILM’s CGI on the stained glass sequence and braved it, treble Yay!

So, when the very nice creator of Poster Spy, Mr Woodhams asked if I watched many films last year and would I do a piece on my top ten of 2014 I must admit a little pee came out!!! But then I realised, how on earth can I choose, I’d watched so many, this wasn’t going to be easy……..

It’s actually taken more time to figure out which ten I could choose than It has to write the article, so apologies to Jack for the delay in the article, just……toooooo………..much…………….chooooooiiiiiiiiiiiiiccccccccceeeeeeeeeeeeeeee…eee…e.

However, choose I did and I also scoured this wonderful site for some of those pieces that encapsulated each film.

In at Number 10 is the cinematic marvel, Dawn of the Planet of the Apes, featuring Oscar worthy performances from the ubiquitous Andy Serkis and Tobey Kebbel in this amazing motion capture epic that sees incredible leaps forward not only in the use of photo real computer imagery but for its technological advance in “on location” 3D cameras, this wonderful film is encapsulated by Simon Delart’s awesome image – 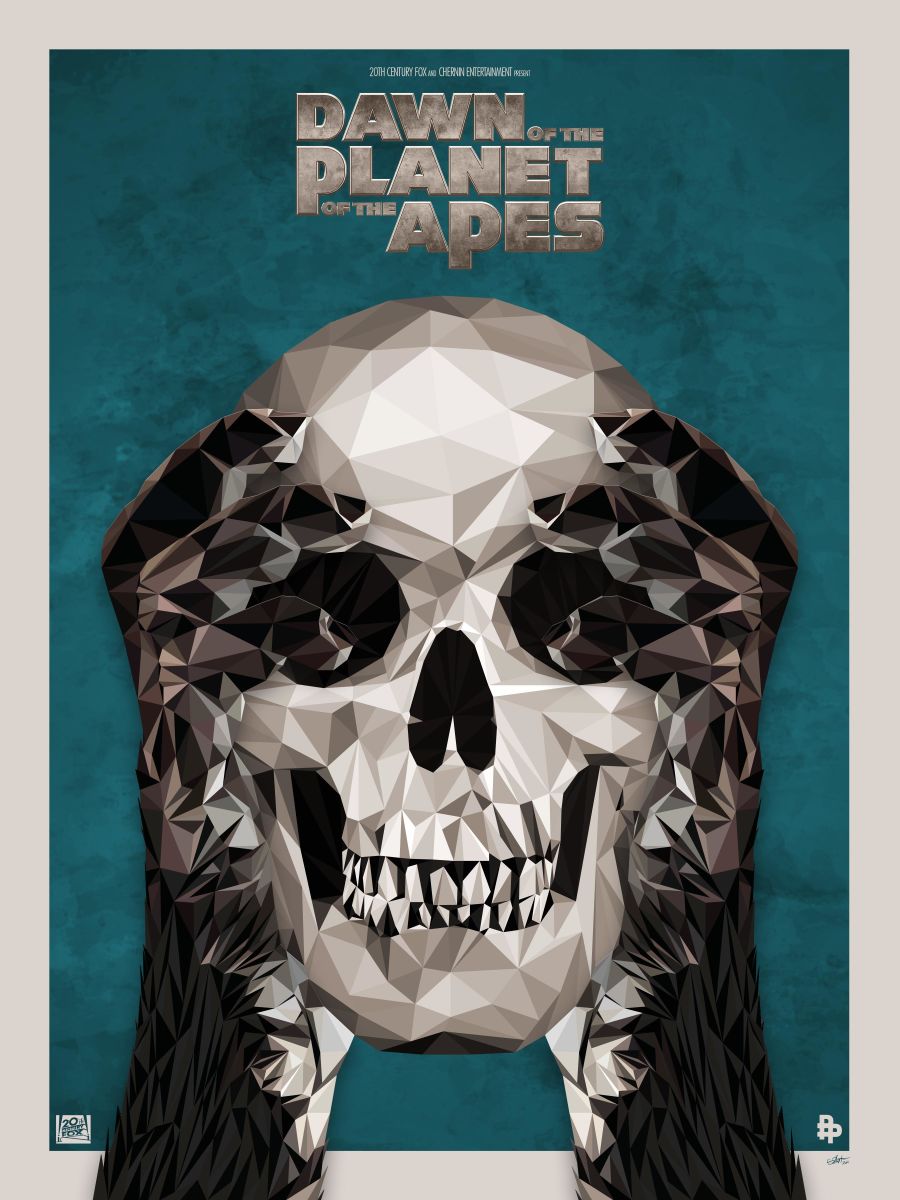 10. Dawn of the Planet of the Apes by Simon Delart

However it couldn’t reach the unique styling’s of Luc Besson at Number 9 with Scarlett Johannson transcending beautiful brutality alongside some very irate French folk, joyous.

Working its backside off at Number 8 is the utterly bonkers infinitely entertaining Live/Die/Repeat Edge of Tomorrow, who would of thought it would be so much fun watching Tom Cruise being splattered time after time after time after time….and then a gazillion more times after that, thank the cinema gods for Emily Blunt and her mental yoga poses and to Joe Davies for his wonderful cinema poster – 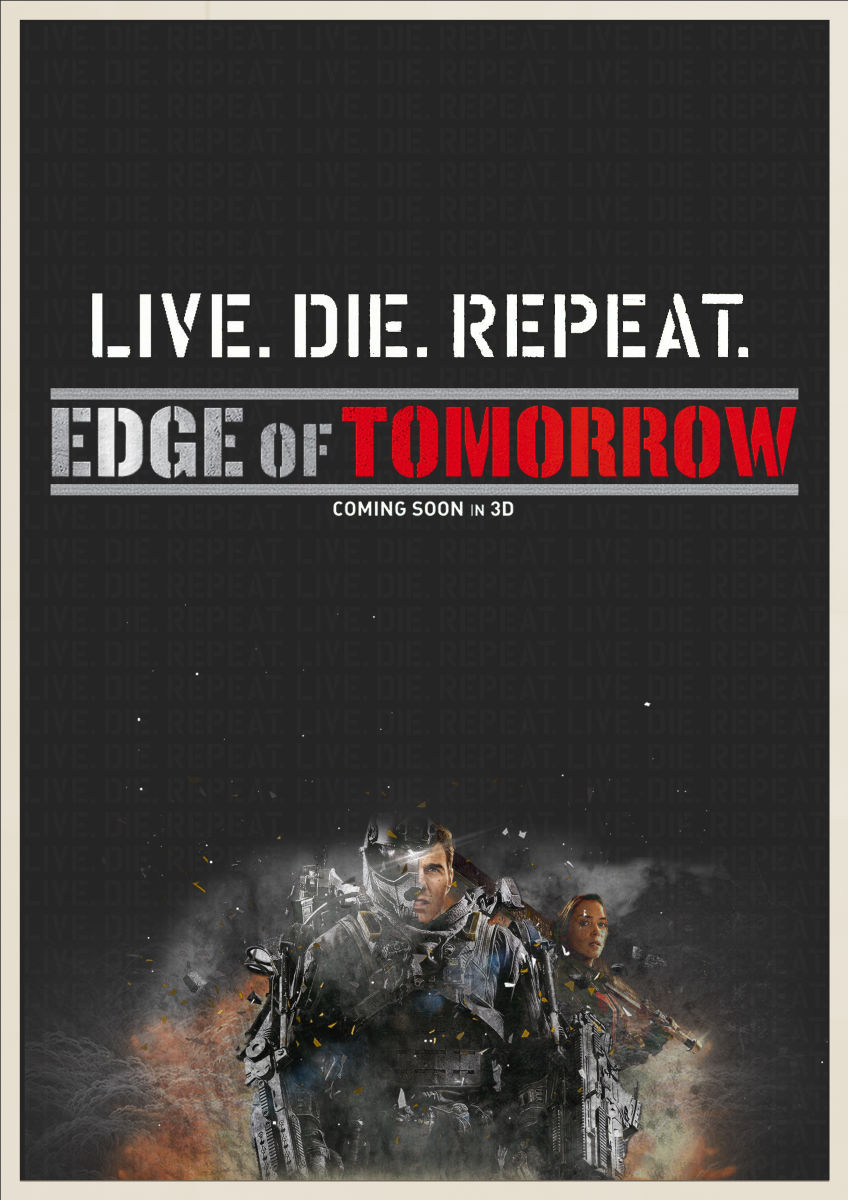 8. Edge of Tomorrow by Joe Davies

With 2014 came the pre-cursor to X-Men Apocalypse and the welcome return of Bryan Singer to the franchise at Number 7, fortunately Michael Fassbender did away with the wandering accent from X-Men First Class to the wonderful Days of Future Past that makes up for the scary X-Men Last Stand’s many horrible, well horriblenesses. In a film where one slo-mo sequence almost steals the show……. All of this captured in Marie Bergeron’s single image below 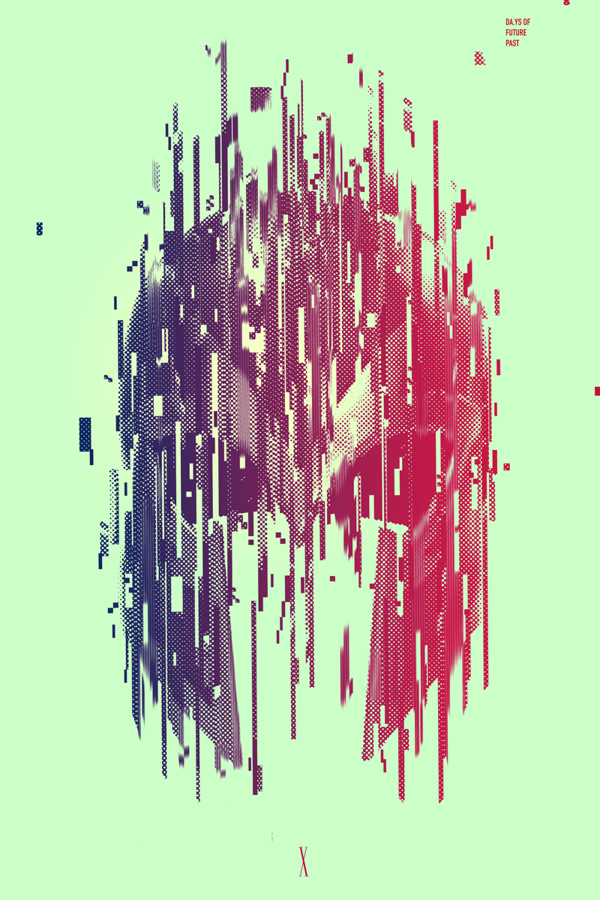 7. Xmen Days of Future Past by Marie Bergeron

Not groundbreaking for it’s special effects but groundbreaking and awards bait for its amazing concept, in at Number 6 the 12 year epic that is Boyhood. I only watched this recently and was mesmerised by the transition of a young lad through Linklaters ‘normal life’ span. Filmed 12 summers running its reported that the cast became family over that 12 years,,fantastic to watch MJ’s transition, fortunately not as creepy as watching Haley Joel Osments Man-Child transition…eeeek. What is one of my favorites is emreunayli’s transitional poster below – 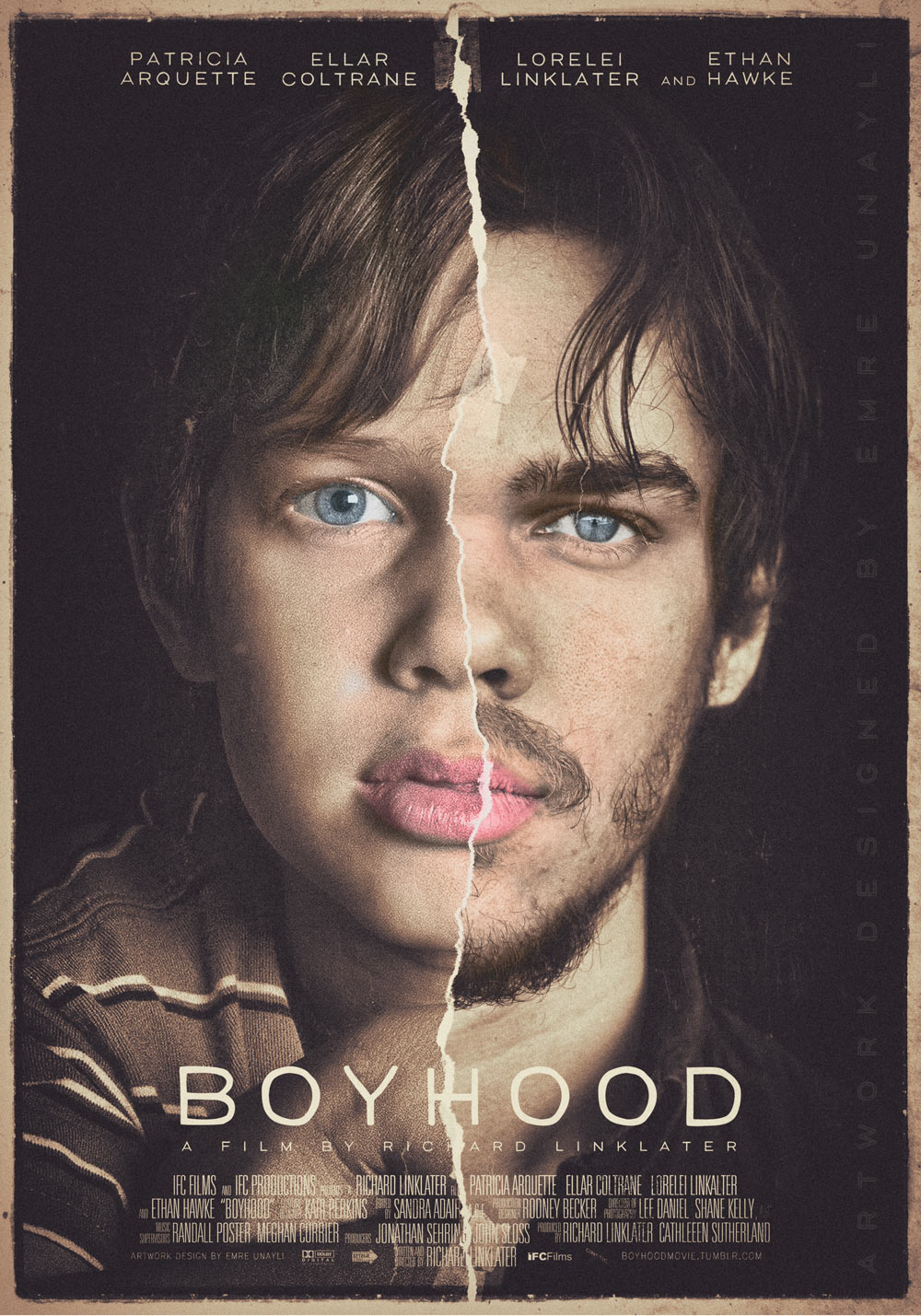 Rocketing through the mist at Number 5 has to be my Favourite dragon of all time (sorry Smaug, nice effort though) but how can anyone resist the delights of this animated world and depicted below by PayBackPenguin’s crisp poster – 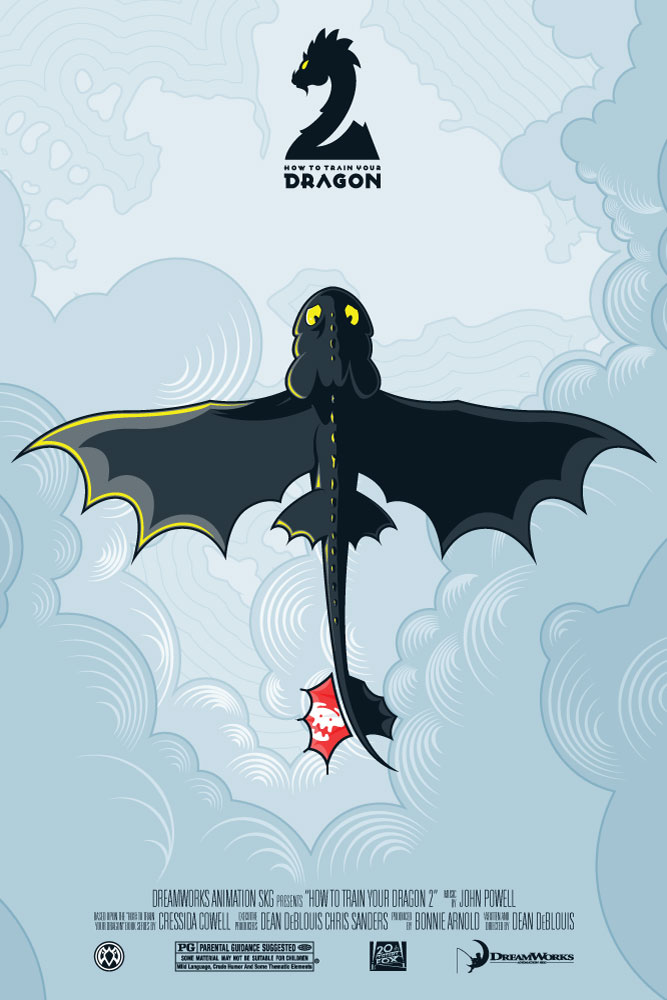 5. How to train your dragon 2 by Josh Campbell

On to my second Scarlett entry into the canon with the insidious Under the Skin at Number 4, this has this slick, simplistic elegance of Ex Machina using real folk to spend time with our Miss J, instead of trying to describe this film I’ll simply say it’s very Black & Shiny which has the nail firmly smacked in its interpretation by theblokewhodraws – 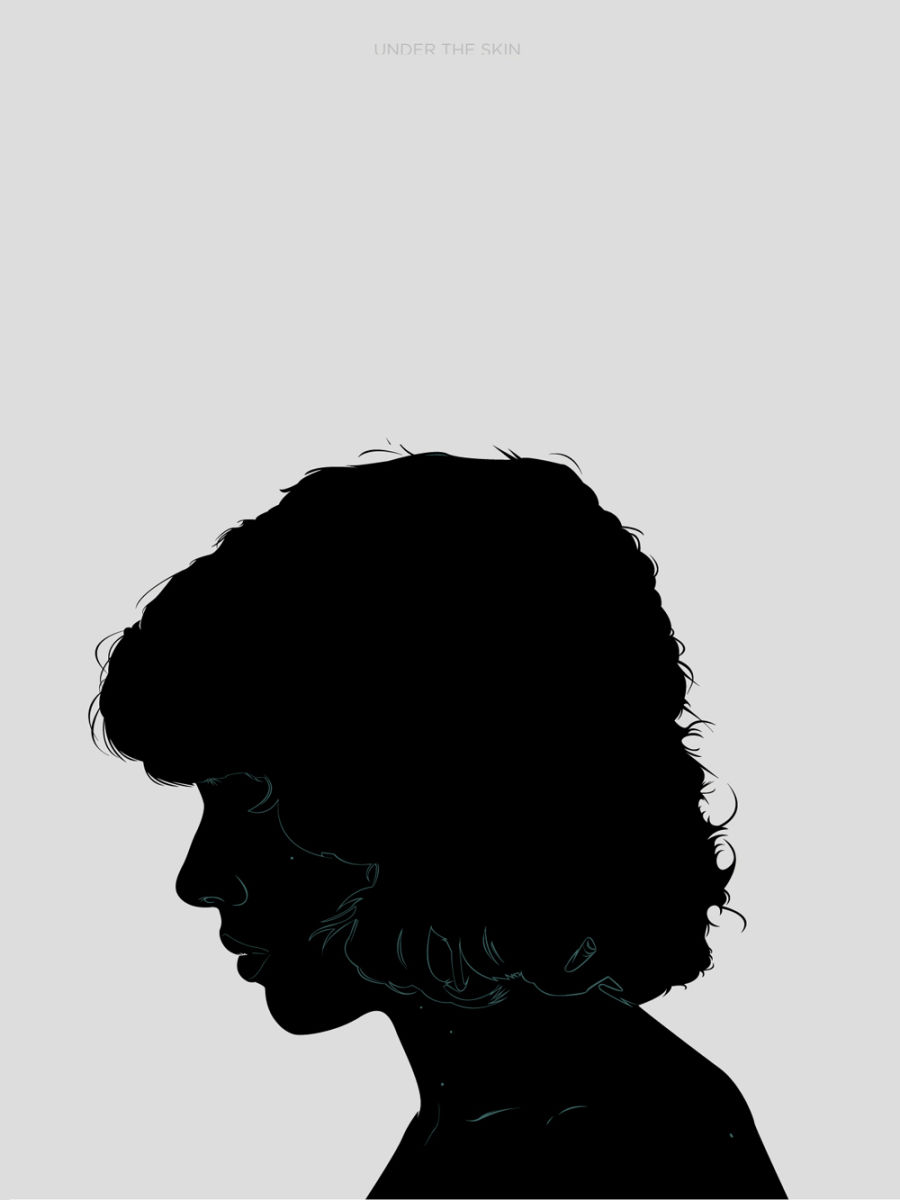 4. Under the Skin by Paul Hancock

We are into my Top 3 of 2014 now, and whilst everyone will have their own favourites from the last year the next three are films that I haven’t stopped watching, over and sadly over again..

My life wouldn’t be the same without David Fincher who, at Number 3 with Gone Girl takes you and the of course Batfleck on a journey that no one in their right minds should take, depicted with a single message below from Kieth Brydie,

I cannot say enough about the Russo Brothers interpretation of Winter Soldier at Number 2, it isn’t enough to say that the brother had elevated the Marvel screen franchise to new levels with this bar raiser before 2016’s Civil War and the Infinity War two parter rumoured to be headed the way of the Russo brothers to work their magic on. I have now watched this around 100 times, no really and it to me is almost (almost…..) the complete Marvel film to date….can’t wait for Spader’s Ultron though…..quadruple YAY. So to put that into one poster, the wonderful tommypocket below, superb. 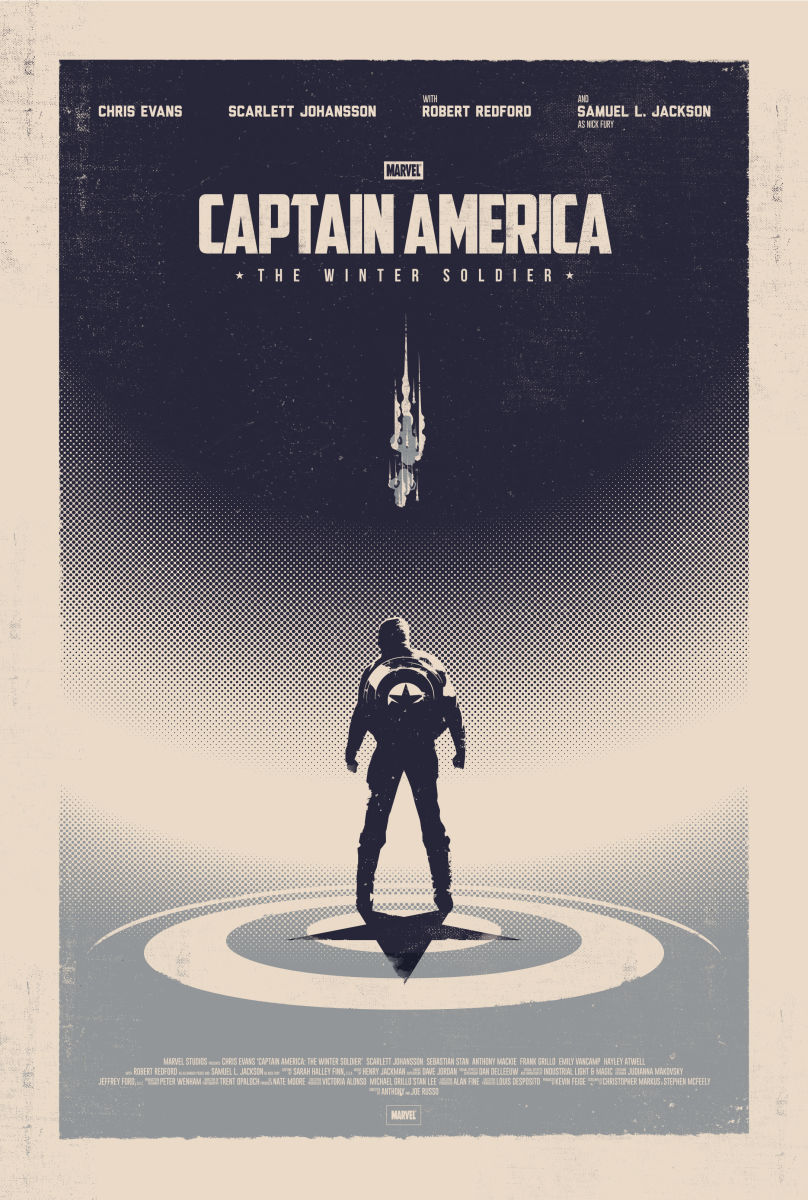 Scarily I had only been on the periphery of My Number 1 in the comic book stakes, it initially slipped by but around 2012 there were real rumblings of Marvel beginning to take some brave pills and not just have a bloke in a metal suit battering another bloke in a metal suit and went Galaxywards. It’s one of those films that will bring a lot of the pieces of the Marvel Universe together or should I say tear them apart but in a really, really, really fun way. For who, before the terribleness that was the script of Iron Man 2 would have thought it could be pulled off, enter one James Gunn and a love of Racoons. Where I’ve watched Cap 2 loads of times, I’ve watched this much, much more. Why? Well Mr Gunn has taken something seemingly dangerous and risky to the future of the films and produced a tour de force in modern filmmaking. Before the film was released though so many fantastic artists were translating images from GOTG to one sheet summaries that were simply awesome. Below is one of my favourites and crashed expertly together two immense movie franchises, roll on Star Wars Ep 7 and for me comes full circle to that bleak evening in 1977….. Thank you to Matt Ferguson for this masterpiece below…. 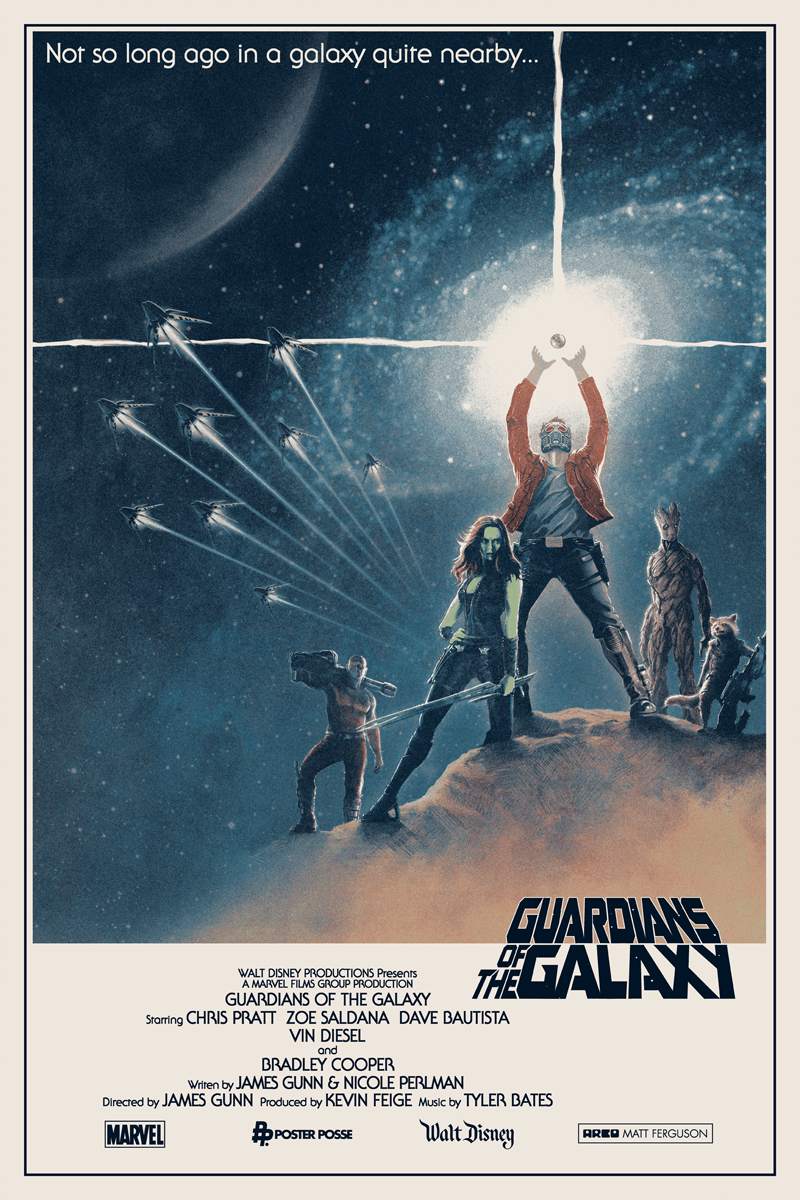 1. Guardians of the Galaxy by Matt Ferguson

Next time it’s your choice, would you like to hear about my Favourite games of 2014, my love affair with Masterpieces of modern television or more interview. The choice, as they say, is yours (or maybe mine and Jack’s!!!!!!)

Agree or disagree with our TOP 10? Tell us your Top 10 below!