Ellie: It doesn’t matter how much you push the envelope, it’ll still be stationery.”

Gaming has, for me been part of my life for as long as I can remember. I am, as my tagline suggests, one of life’s geeks and I am not embarrassed to admit it. okay so I’m not geeky to the point of having my own command centre nor would I be able to pull of the sheer joy exuded by the cosplay crowd but I do love my games.

Since a small child and having one of the worst handheld electronic space invaders games (actually it was awesome at the time) I have followed developing and new technology and, where hidden funds would allow it, have invested in the next new games console. In the 80’s I had an Amiga 500 cassette loaded, and even remember now making the standard statement that all geeks do ‘aren’t the graphics amazing……!!!’. but it wasn’t until the 90’s leapt around that I truly began my journey as a gaming geek – the advent of the Sega Megadrive, ok so Nintendo had Mario but Sega had the coolest hedgehog of all time.

Then as the mid 90’s rolled around we wandered into the modern era of gaming with the release of PlayStation, step away from sidescrollers and into the joy of my very first experience of Resident Evil.

The console and the game were not mine, I had been away from gaming for a little while as I focussed on work life but whilst away on one of those work things a friend had managed to sneak a PS, found a remote corner of a very old building we were working from and had fired that little beauty up. I had been out and about and had wandered back in to that little corner of the building drawn by the sounds of creaking doors and atmospheric screeches. the room was dark less the glow of the TV, the room was quiet but for the sound of buttons being frantically pressed. I sat and watched in amazement ‘aren’t the graphics amazing…..’ I regurgitated, but blimey they were. I sat for hours experiencing Resident Evil for the first time, scared witless at times as you could almost here the heartbeats in the room as the sheer fear of the unknown around the next corner in the Umbrella Mansion struck minute by minute.

As the major console and gaming PC developers grew so did my passion for gaming. I followed every Resident Evil and Silent Hill with glee and sat around the periphery were the Call of Duty’s, Crysis(s), Nathan Drakes to those games that were almost like event TV or milestone movies of our era I didn’t just love mindless button pressing but the journey that the game took me on from the revelations of Bioshock to the morally ambiguous decisions of Last of Us.

So, in time honoured tradition I have attempted to articulate my favourite games of the last year or so. The hardest part for me was deciding on whether this was my top ten of 2014 or of all time or of any time, much like movies and TV the choice, for me is almost endless, so whilst most are from last year there are some that slip outside of that, so I apologise to the purists and hope you enjoy my choices –

In at number 10 is one of those games that modern consoles were made for and so very far from the 90’s sidescrollers its ridiculous to think that in just a couple of decades we have come on so far, it is of course the wonderful Destiny here beautifully captured by 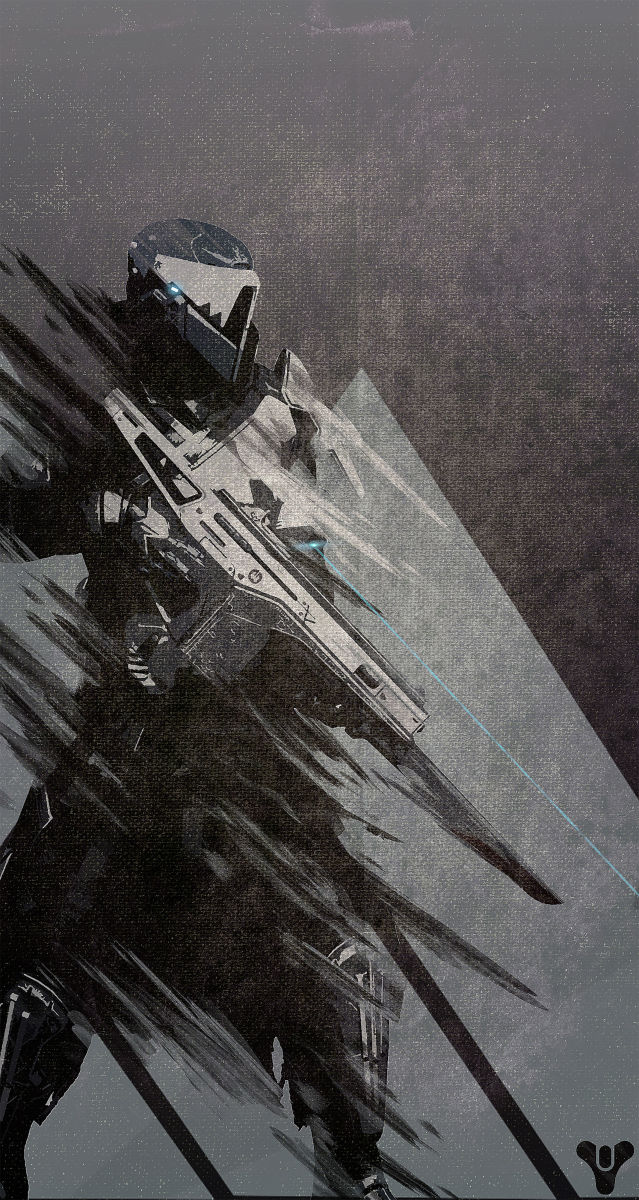 Okay so not technically from last year but relatively close (ish). I was always drawn to solitary single player games, late at night, lights down and enjoying the adrenaline caused by feeling my next move would equal discovery. The Hitman anthology culminates in Absolution and this year we see Rupert friend bringing Agent 47 to life again in the cinema but for me Hitman is always a game I circle back around to, dramatically captured here by Joe Davis – 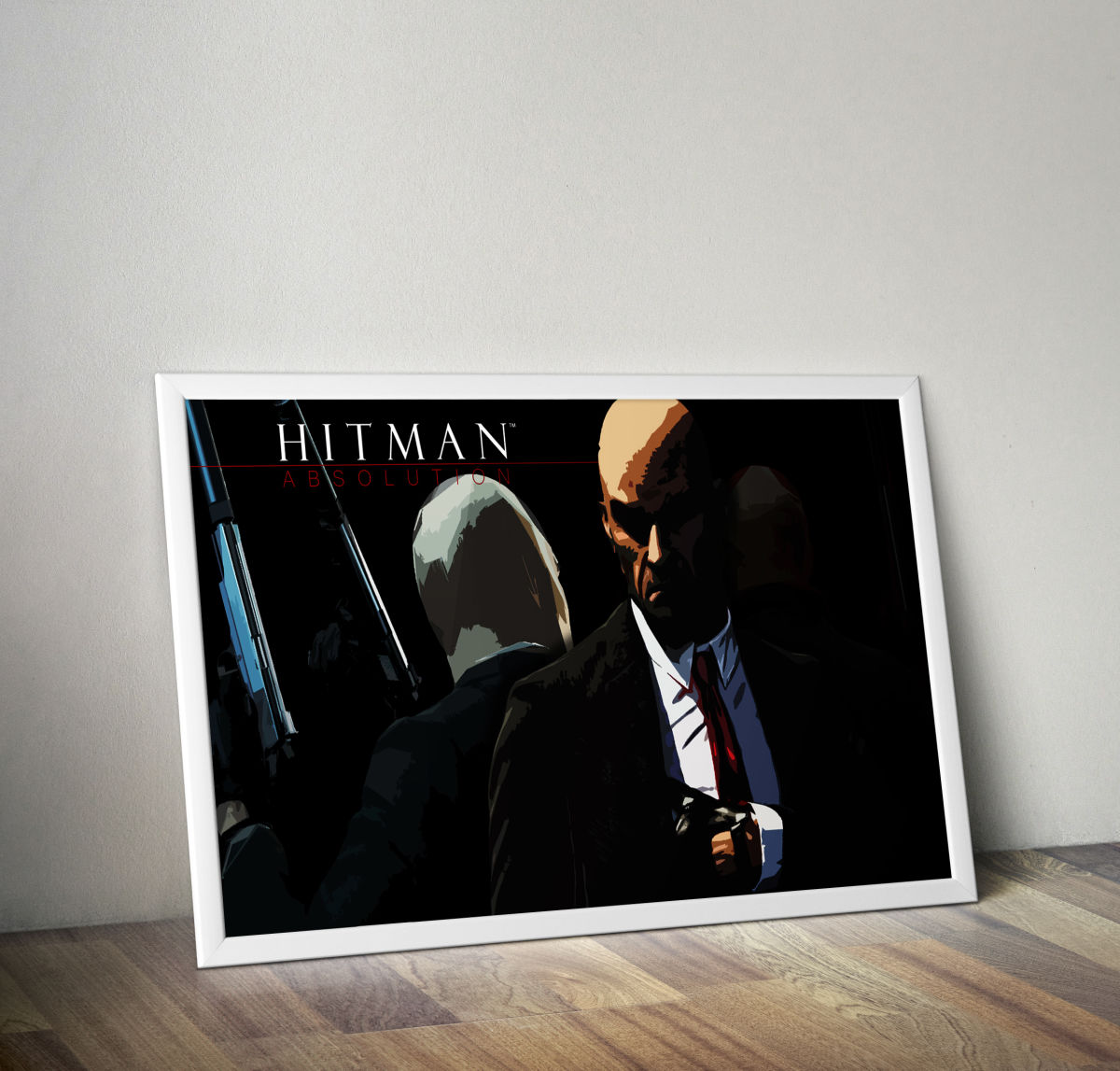 In 2015 Batman Arkham Knight hits the consoles with the much anticipated addition of bat-mobile gameplay. There had been many, many articulations over the years taking batman to the consoles however they had tended to try and follow the madness of some of the later films. when Asylum hit the shelves in 2009 and then Arkham City in 2011 a new, intense realism was added to the canon, rejoice with WillBruceArt below – 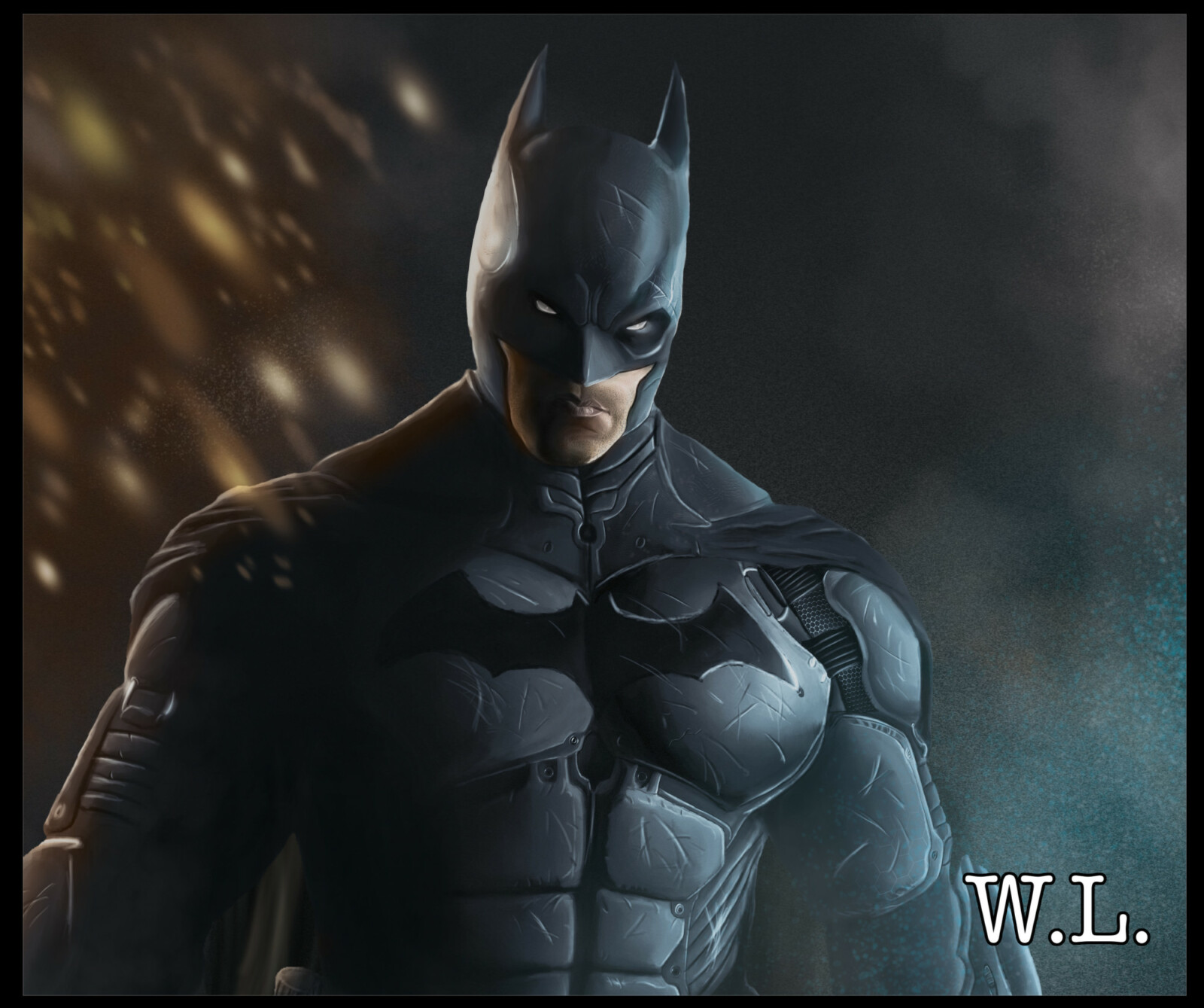 Bringing us bang up to date and from the master of survival horror Shinji Mikami and took me right back to my days of Resident Evil’s creepy corridors is The Evil Within, Shrimpy99 hints in his poster at what is to come –

7. The Evil Within by Shrimpy99 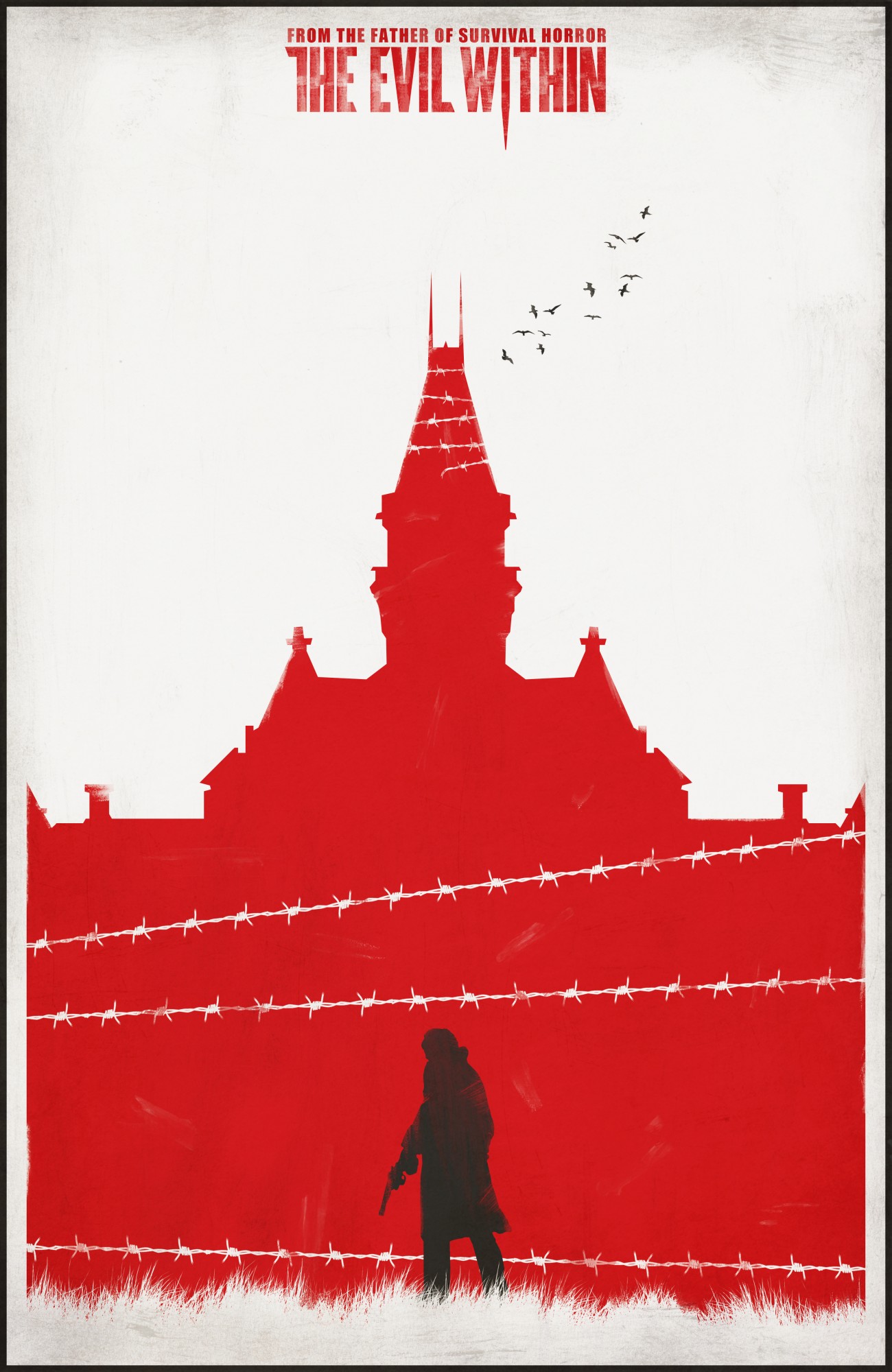 In at Number 6 was a game that tested my first real gaming PC to its limits but boy did it deliver. The thing that most intrigued me about Crysis, apart from the magnificent Nanosuit of course, was the distinct left turn in plot that’s hinted at but not thrown in your face from the outset. Who would have thought that those pesky North Koreans would be the cause of a bonkers alien life form… and here is Shrimpy99’s smart articulation of this fantastic game 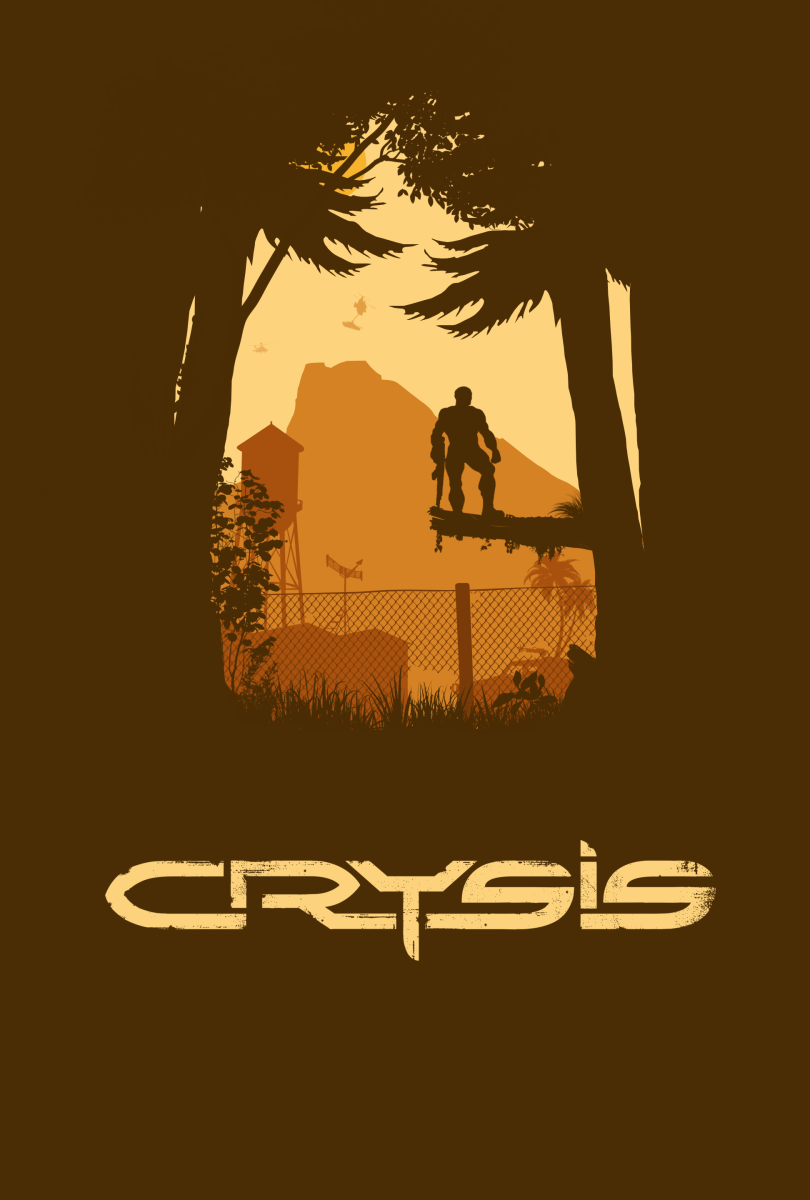 When Nathan Drake’s first adventure hit with the launch of PS3 I missed it at first. Much to my shame I had been away from gaming for a little while and the PS3 re-lit my need to play. I came to the wonderfully self-deprecating Drake via the sequel and aside from the fantastic visuals, the amazing voice cast I found a game that really engaged me and for some time it was all I could bore my very patient partner about. Since then I wandered back to the original and then to the deserts of the 3rd part. as we head into 2015 and Thief’s End there is an expectation that the next game will almost be genre defining and certainly stretch PS4 to its limits. Through all of these wonderful parts my favourite will always be the ice caves and the guardians who are only hinted at in heart bumping movements of shadows until they finally confront the less than wisecracking Nathan Drake – 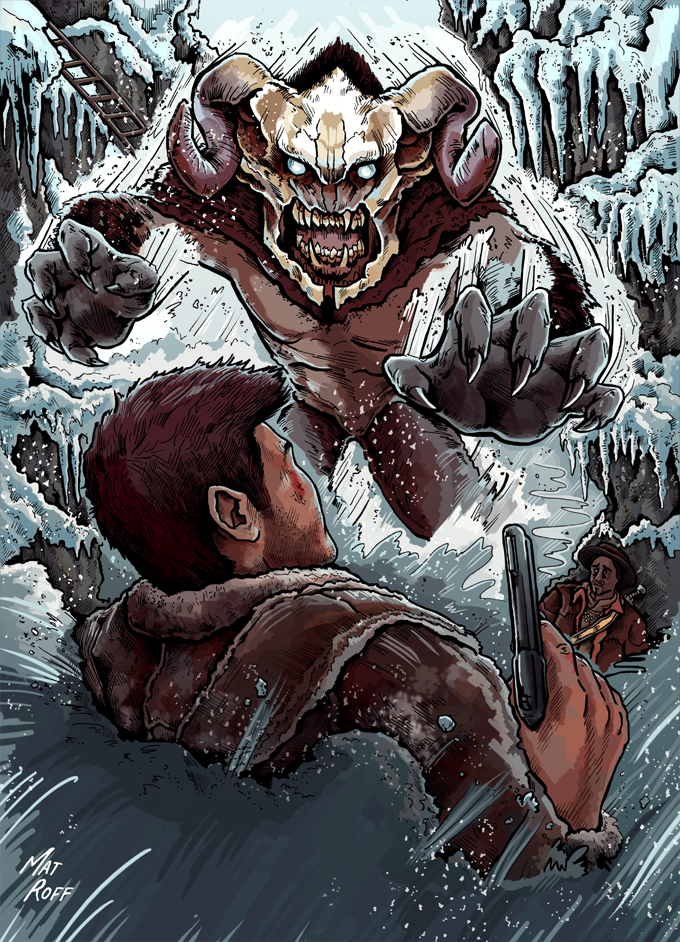 Scaring the life out of me, yet again is an Alien game that finally hits the mark, there had been some attempts to recreate the atmosphere of Alien/Aliens in games and some had almost made it but hadn’t quite hit the suffocating paranoia of the films. When isolation hit the shelves I was a little sceptical but trusted the critics reviews of a new era of film to game translation, it didn’t disappoint. From the realisation that the lockers each had an in game message saying ‘Hide’ was a worry from the outset and only became worse and scarier as the game went on. This is almost one of my favourite games of the last couple of years but has been beaten by very worthy contenders. That said if Mr Blomkamp is listening keep the tension of Alien and the adrenaline of Aliens and play this game for inspiration – captured in a single image perfectly by EdwardJMoran – 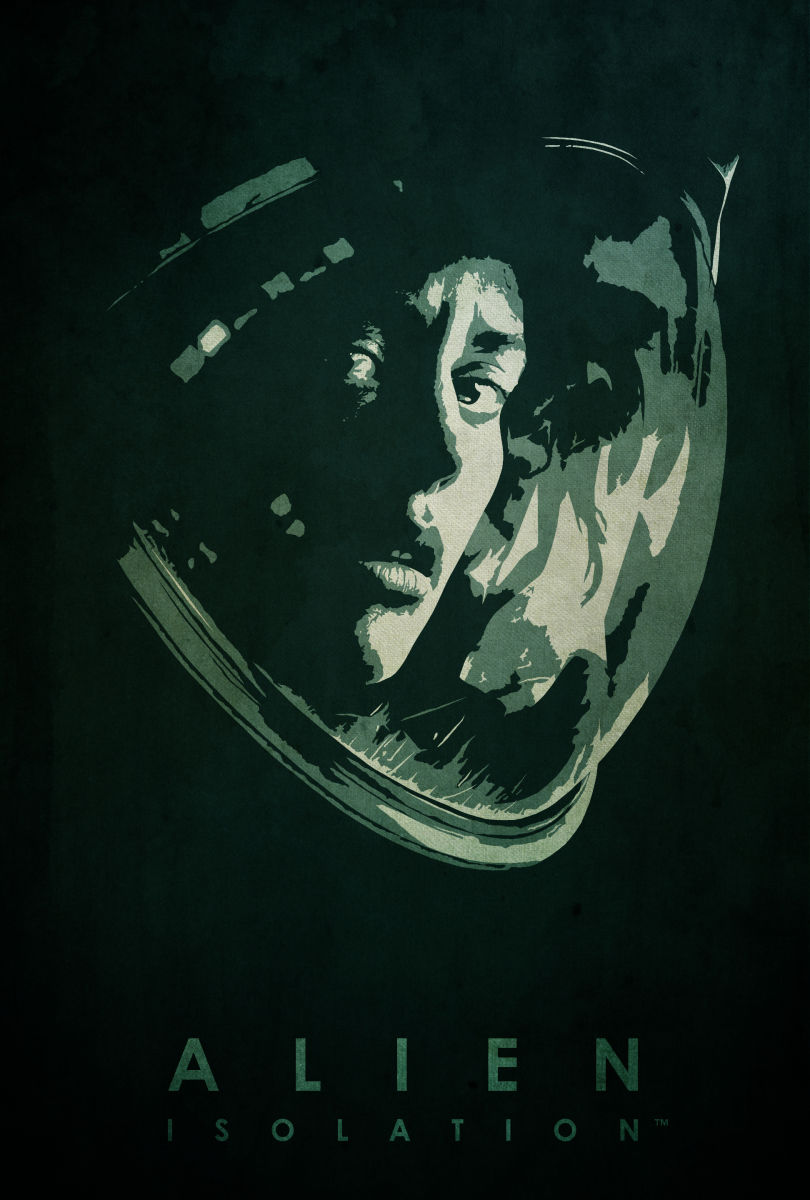 At number 3 I sort of have the same love affair with this game as I have with Resident Evil. In the Tomb Raider franchise it started off very well the lost its way for a while. some would say it lost its heart and had forgotten its roots. When the game was reinterpreted and taken back to an origin story it harked back to those wonderful days on PlayStation, ok not as pretty an image you would get from a new generation console but gameplay was clever and not easy. The new beginnings story gave us real next generation gameplay whilst maintaining the heart of Lara Croft and also delivering breath-taking visuals. This is a game I haven’t stopped playing since it was released and with the next instalment due in the next year I can hardly wait. Who better then to have realised Lara’s images than the founder of Poster Spy himself, Mr Jack Woodhams, awesome – 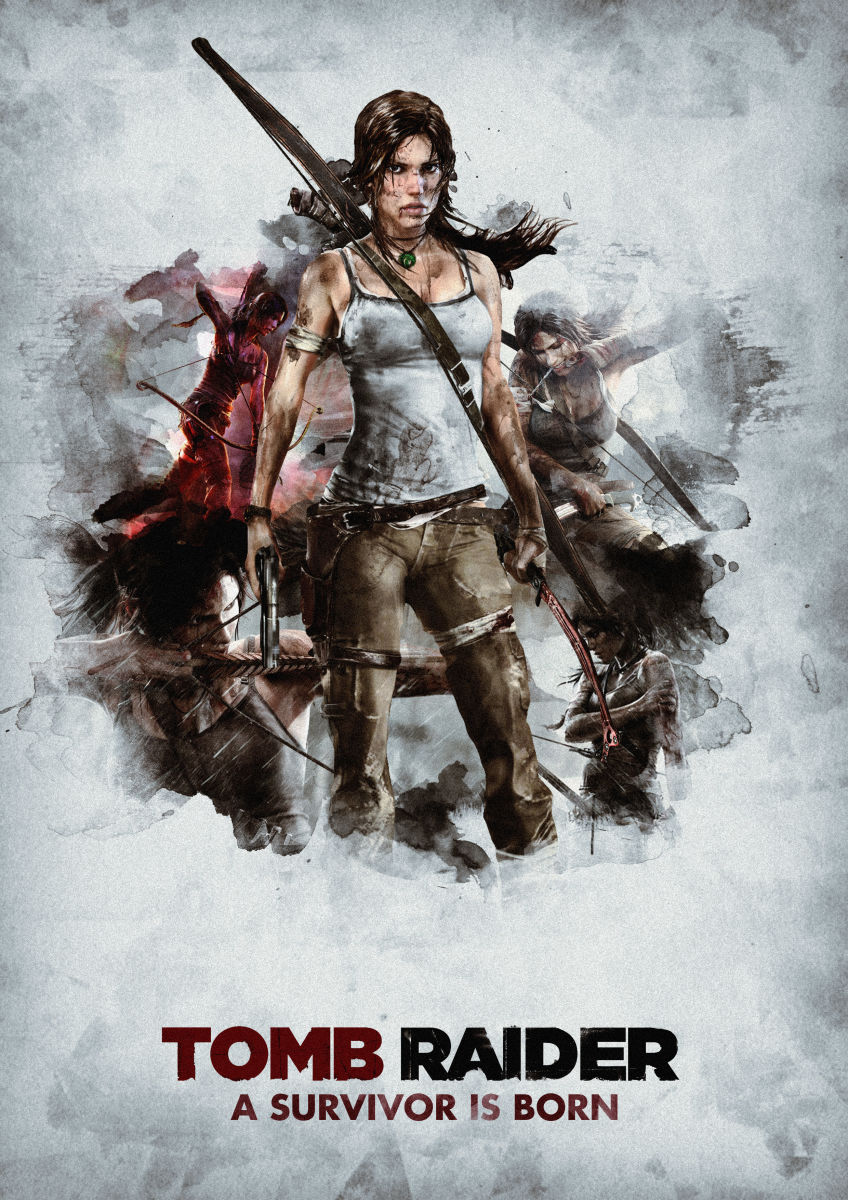 My next game is one I haven’t yet played enough, but in the short time I have played it I just know it aims to be a great experience. I played through from the original FarCry, to FarCry 2 and the wonderful FarCry 3, I have even watched the movie a few times from 2008 with the simply marvellous Udo Kier. In Shrimpy99’s depiction there is yet another simple yet beautiful image that, for me captures the whole game – 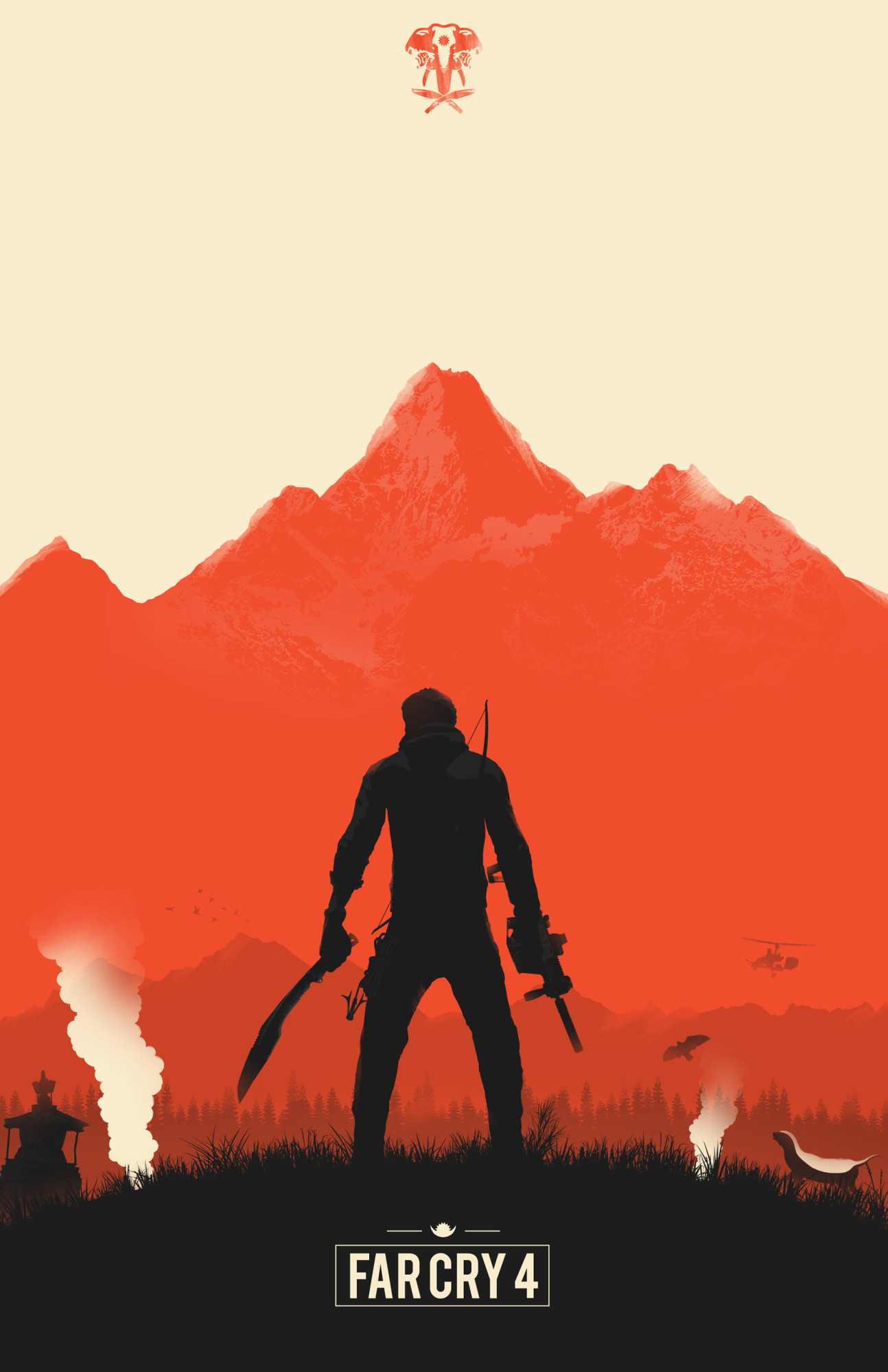 And now for Number 1 – When I first started playing this game it had the feel of The Walking Dead but with a depth I hadn’t experienced in a game before. From Ellie’s daft jokes (see tagline) to being outnumbered by clickers with little or no resource to fight them off with. Apart from the mesmeric visuals to the joyous gameplay the most compelling part of this game is the story. It asks us the player/viewer to be a part of some of the most realistic survival decisions ever committed to a game and then takes it a step further to the point that you feel as though you have been taken through a tornado whilst trying to balance matchsticks. There is a point in this game that you stop playing and almost become part of the environment, feeling every torturous decision that is made by all characters in this game. OllieHoff’s poster says it all –

1. Last of Us by OllieHoff 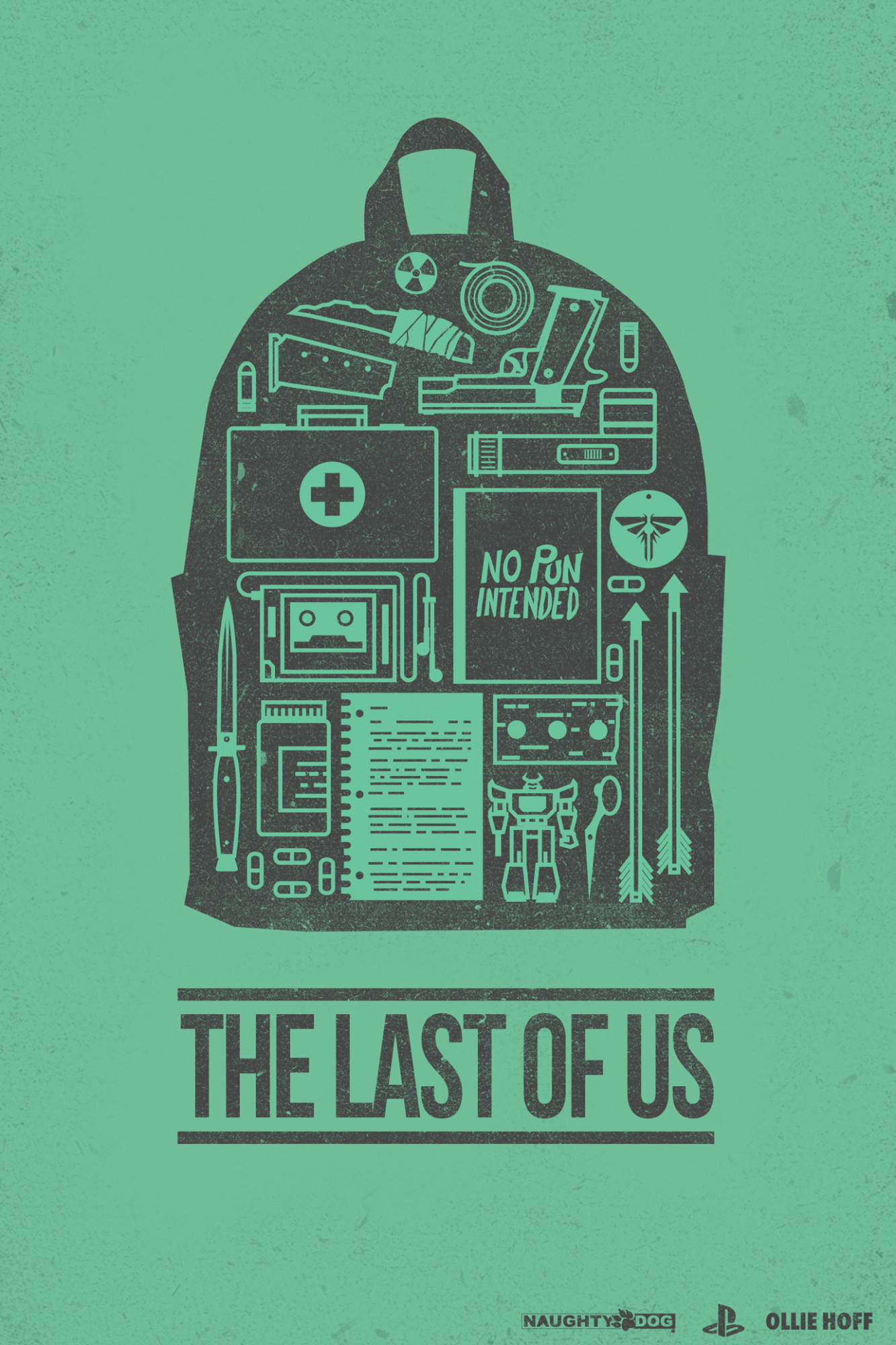 Okay, so I have mislead you, I got to Number 1 and realised I wouldn’t have been true to myself if I didn’t add my all time favourite game, ever (yes ever). I cannot tell you the sheer fear I felt the first time the lunatic with the chainsaw approached me and all I had left to defend myself was a small pocket knife and harsh language. That feeling in the bottom of your stomach as the realisation hits hard and your head is unceremoniously removed, accompanied by the maniacal sound of the chainsaw roaring in triumph. Resident Evil 4 is a masterclass in game making, from the claustrophobic controls that are limited just enough to make you panic just a little more to the timed heart thumping island escape. whilst this game was released in 2005 it is and always will be, timeless. images provided curtesy of SHaDow-Net – There you have it, my favourite games of 2014 (and a few years either side) and whilst I may have meandered a little more than usual you have to admit there as some cracking games here complemented with awesome pieces of artwork from our friends at Poster Spy.

And Finally…as 2015 begins, with some wonderful games and announcements of some even better ones coming in the next year or so, next time you switch on your console or gaming PC, sit back for a moment as those cinematic moments begin and say to yourself ‘aren’t the graphics amazing……!!!’