Tales from the Basement: Stuff I collect

I’d been looking to do something with my blog other than reposting the amazing (and goofy) things I find on Tumblr and around the Interwebs. After an interesting conversation with my friends over at @PosterSpy, they suggested I write about my poster / print collection. Then another friend pointed out I collect much more than posters and prints.

Print 1: My first Alt Poster: Miami Film Festival Woody Allen Retrospective 1987 – purchased at a sidewalk sale in Coconut Grove, Florida – 1988 for $20. Seen here in my first apartment – Hollywood, CA. 1989. Sold for $50 in 1997 when I moved back to NY to direct an independent feature I wrote. The feature lost funding do shady business dealings by my “financiers.” Never should have sold that print.

Print 2: Don’t know the real title, so I call it “Someday Man Will Piss On The Moon” by Michael Bedard – Bedard was most known for his Duck paintings (Pic 3). Also purchased at a sidewalk sale in Miami but for $10. I continue to for a limited litho or the real deal, but with no luck. This has been above my toilet since sophomore year in college. As friend once put it: “That is the perfect thing to look at while you pee. ” He’s not wrong. 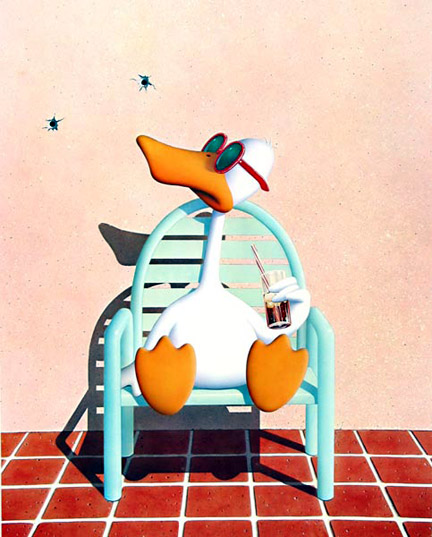 Future entries will be about posters, guitars, photography and various other collectables, under the hashtag: #StuffIcollect. I still don’t think people will be too interested but again, some of my friends think I’m wrong about this. If my friends are wrong, they will pay dearly. #Mwahahahahaha.

Dean Lopata when not collecting stuff, is a writer / producer, most recently from the Fox Television Series Bones.