Have you guys gotten into the holiday spirit, yet? Have you quenched your nostalgia by binging on your favorite version of The Grinch or settled the argument of whether Die Hard is a Christmas movie? Sometimes all it takes is the right poster to get you to where all the feels reside. Well, now we have a list. Ho-Ho-Ho. That’s right; of the top 12 Christmas posters by the very talented artists on PosterSpy. How we went about selecting this list was by asking ourselves what makes a Christmas movie? Does a film taking place around the time of winter count or does it have to center around the holiday, itself? Does there have to be the mere mention of Christmas, or can there be another takeaway, with the same spirit? We plan to address these as we go. 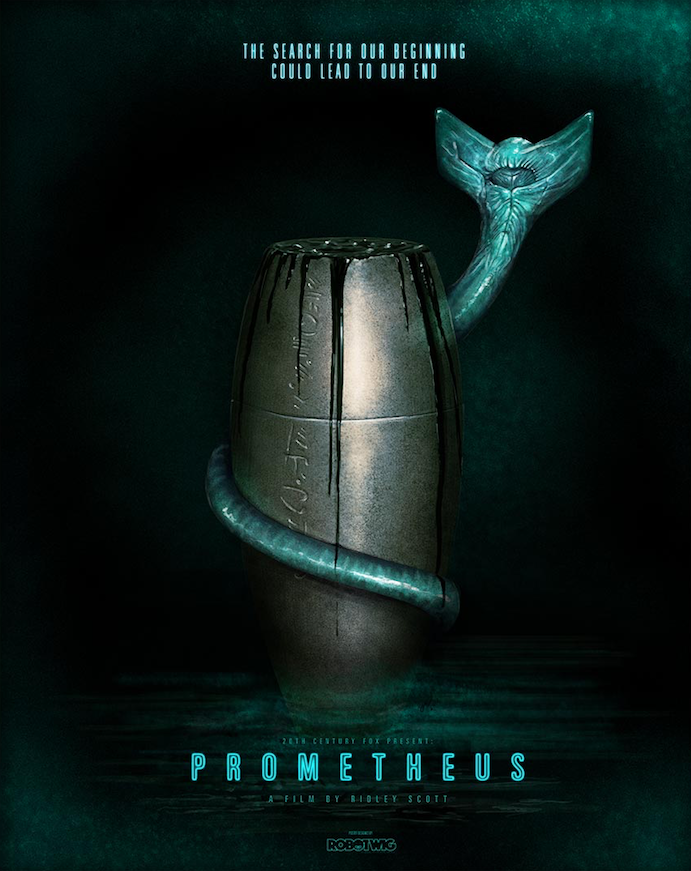 Technically, they search the alien space craft on Christmas Day, and even goes so far as to say the line, “It’s Christmas. I want to open my presents.” Perhaps there’s a lesson to be learned. Perhaps Santa filled their stockings with face huggers instead, because they were bad scientists. Anyway, the composition to this poster is quite modern. The title layout is reminiscent of other modern poster titles like “Get Out” or “It Follows” rather than the traditional Alien treatment; it’s quite refreshing. The color scheme matches the visual color of the film, and the new face hugger looks like the cat who not only ate the canary, but wants seconds. 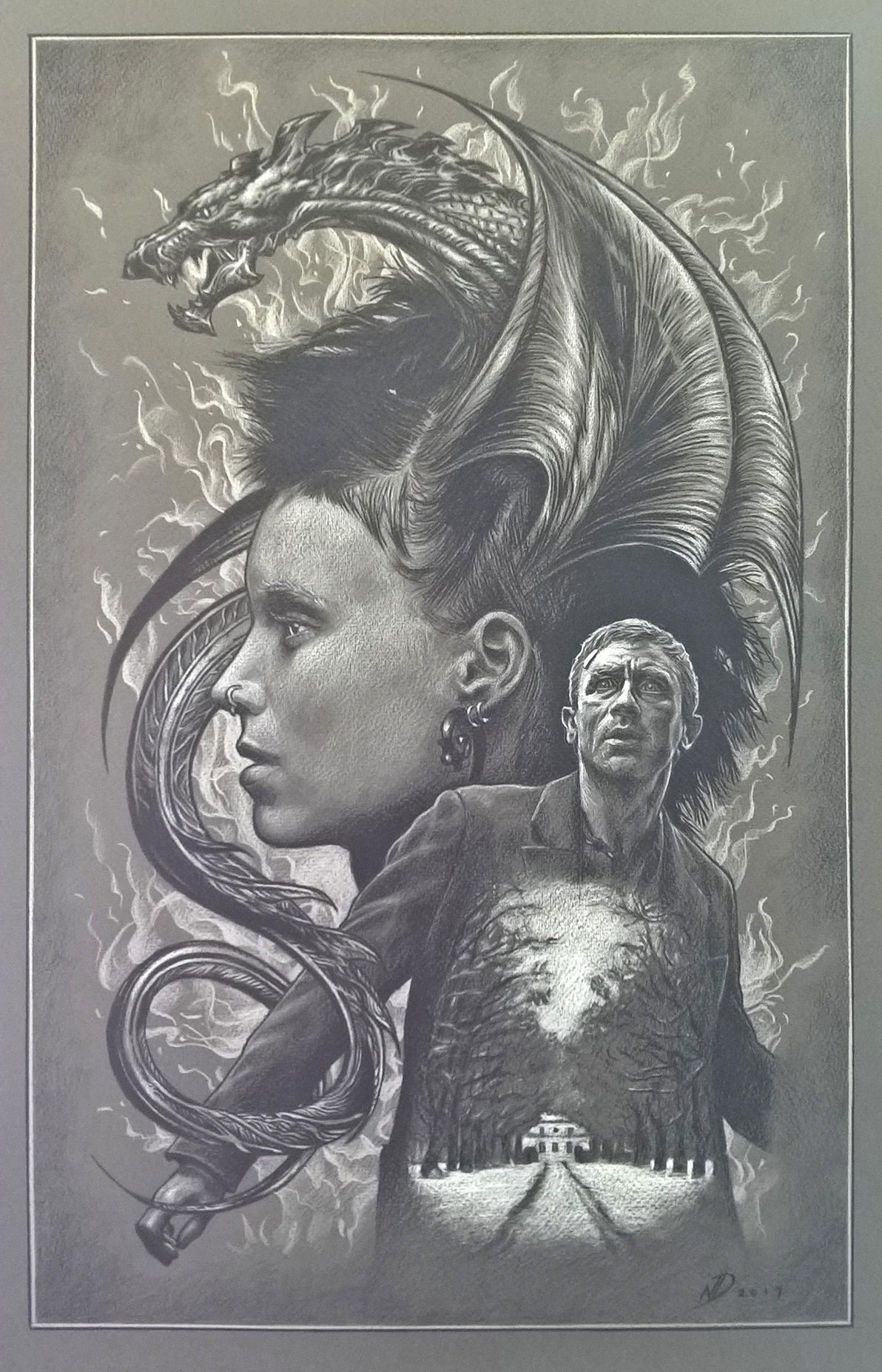 #11-The Girl with the Dragon Tattoo by Neil Davies

I thoroughly enjoy posters when they’re done traditionally. To see and feel the textures of the pencil applied to paper to create the characters and scenes you enjoy in a completely new experience is no minor feat. The bookends of the film take place during the winter months, and the last scene shows one of the main characters tragically throwing away a (Christmas) gift intended for a friend who she may have felt rejected her. I know this list, if you started watching around the holidays, may make your girlfriend question your relationship; but the next poster ought to put everything back on track. 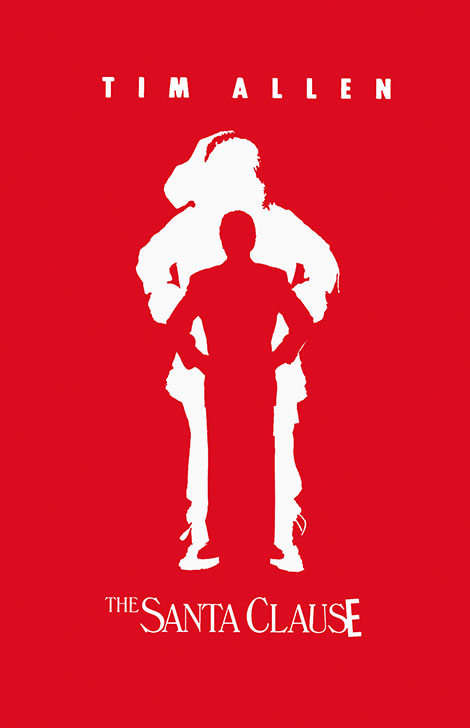 #10-The Santa Clause by izdesigns

If you’d look at izdesigns’ other posters next to this one, never seeing The Santa Clause, you’d think it’s a horrifying thriller. I often say minimalist movie posters have their place, but when they’re done right, they can be affective.The image completely resonates with the idea of the film, and I could imagine seeing it on the front of a BluRay slip cover. 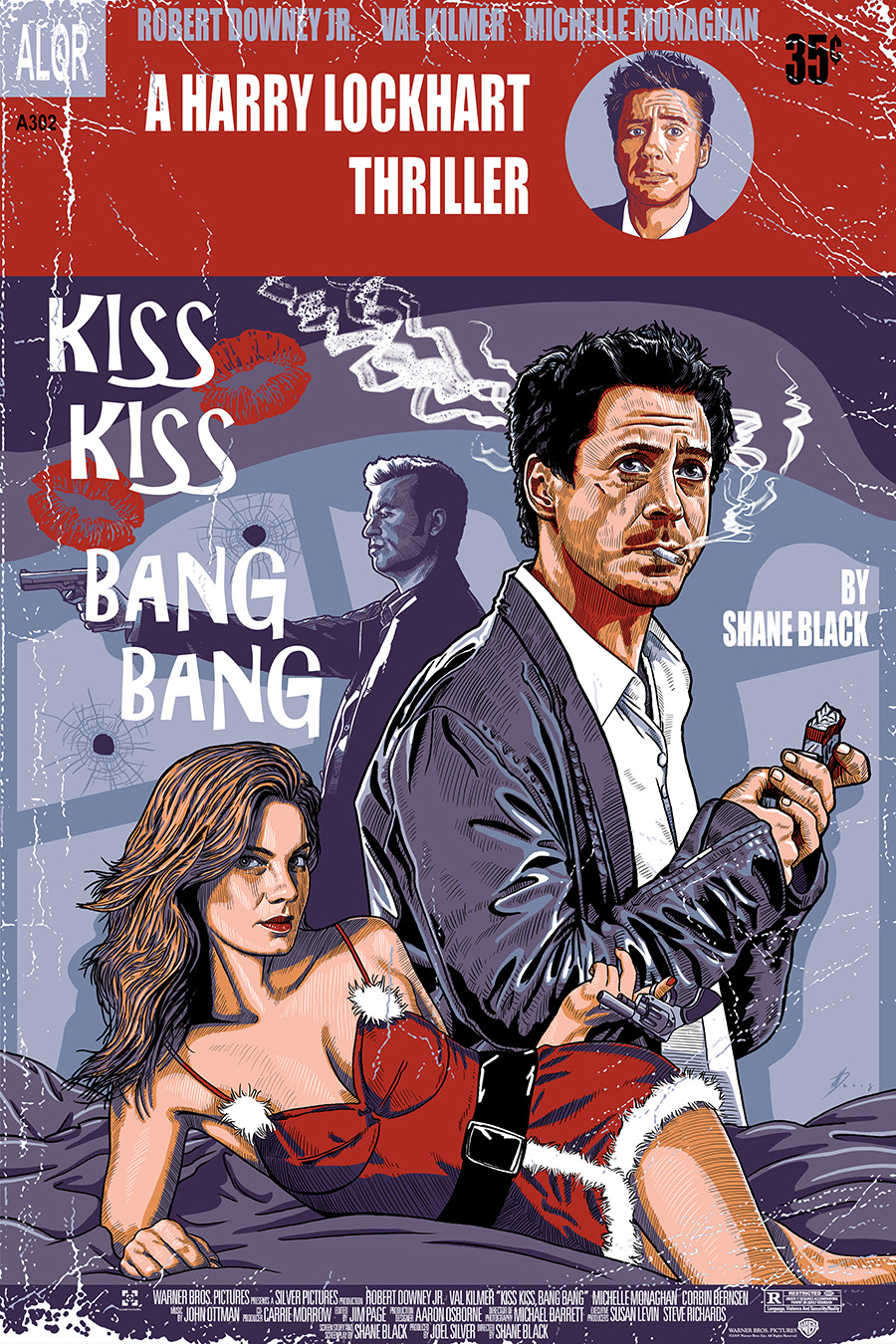 What is Shane Black’s obsession with Christmas? From Lethal Weapon to Iron Man 3, the holiday of Christmas tends to play a key role in his films. Case in point, Kiss Kiss Bang Bang. This poster takes the main theme of the film, a modern pulp detective story, and shapes the main characters in that style and format. The original poster plays no part to clue you into what you’re in for except for a series of montaged imagery inside the silhouette of two filtered characters. The style and execution in Neil Davies’ poster is on point, and definitely brings more character into the film than any other. 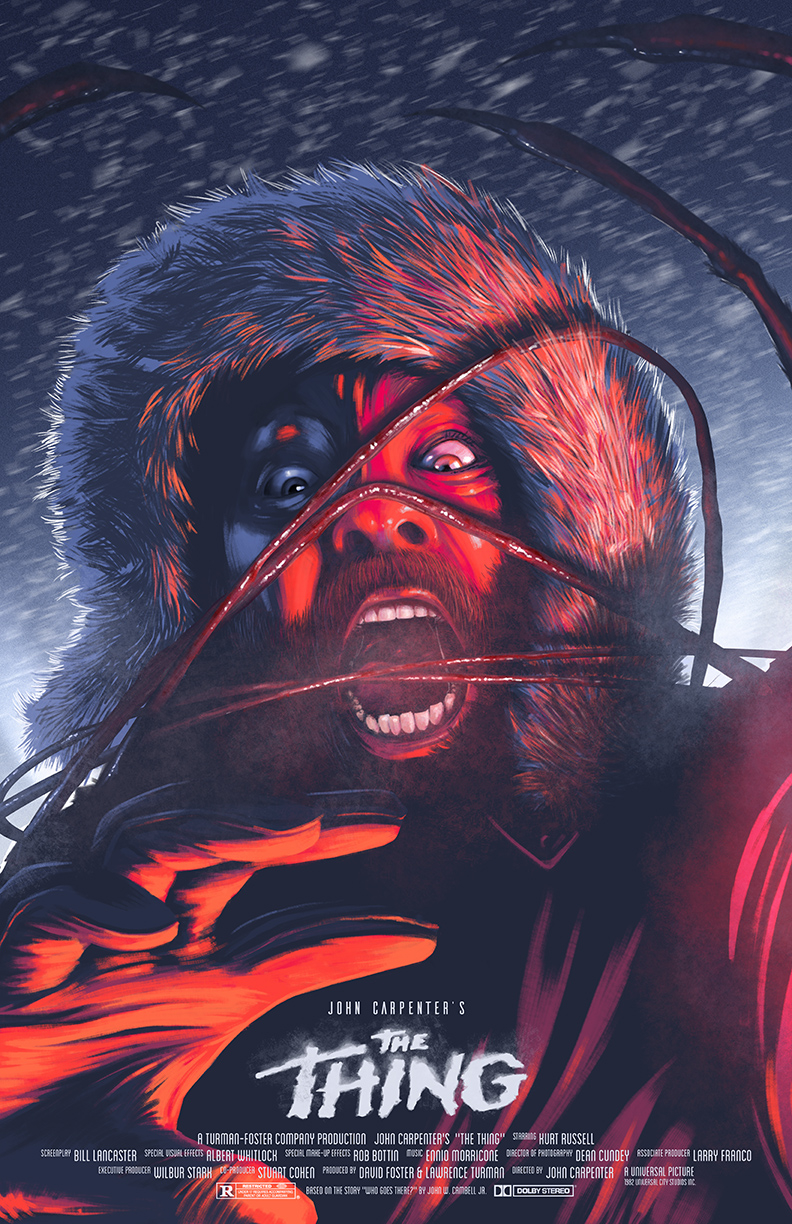 Nothing begins the “first damn week of winter” like watching John Carpenter’s The Thing. If I were to identify the meaning of Christmas in this film, it would be to spend time with the people you’re stuck with while they’re still human. Other than the details of snow and cold air presented in the imagery of this poster, it’s the layers and crisp brush strokes that really make it pop. The 50/50 divide between the red flare and blue night remind me of the schemes used in the film, Creepshow. The shock of what’s being presented is trickier to process when you have two opposite colors competing with each other. This poster says it all and I gotta take a look at this art book. 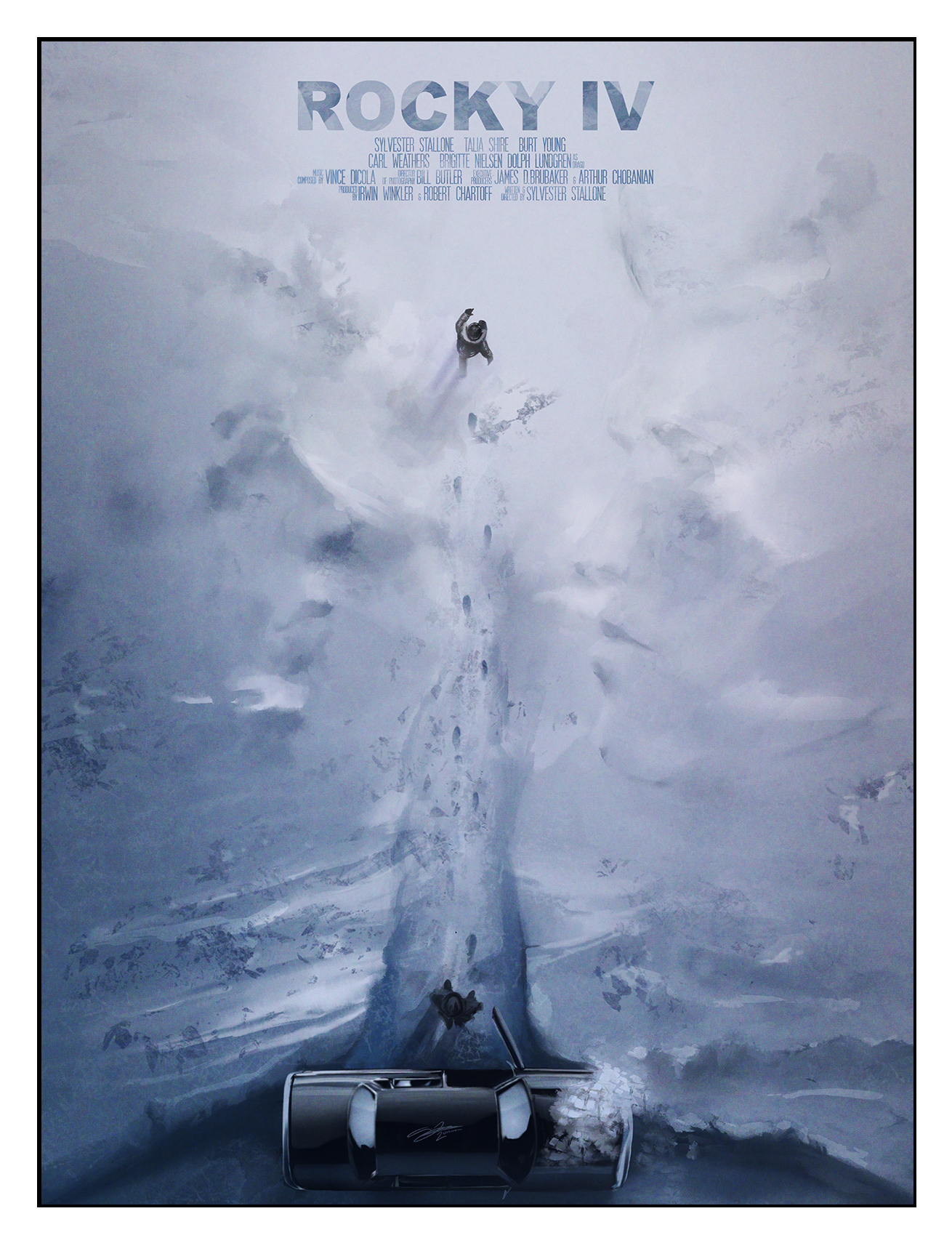 Okay, so you’re probably asking yourself by this point when we lost the consistency. There never was any. However, Rocky IV made the list not only for its epic 80’s style, but it does in fact take place on Christmas. This poster snapshots a scene where Rocky Balboa is training and tests his speed by ditching his Russian escort. The poster captures the harshness of the environment and I enjoy the neat framing and title treatment. There’s realism to this poster, and when you compare it to the film, you may turn your head sideways. The film itself can be tough to swallow, and when the mind wanders about designing a poster around it, it’s refreshing to see Fairhurst pick such a more subtle scene as its focus. 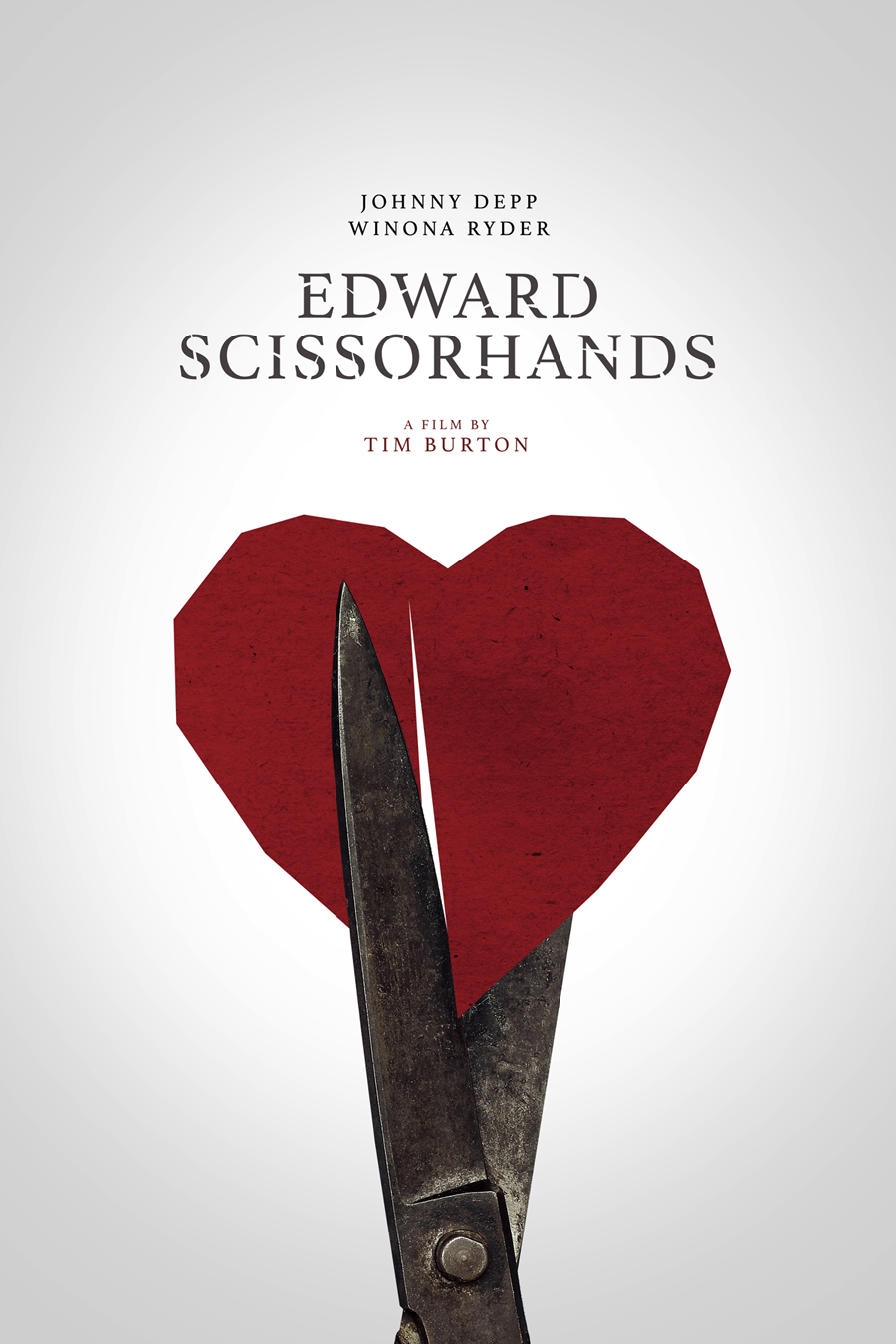 Another fine example of minimalistic design but this one, in particular, has more versatility. Forgetting it’s for a film poster, I could easily see the image on a book cover or hanging in an art gallery. There’s poetry in the image, and you yearn to discover the meaning behind it. This poster is a slam dunk. And if you’re wondering where Christmas resides in the film, think about why it snows. 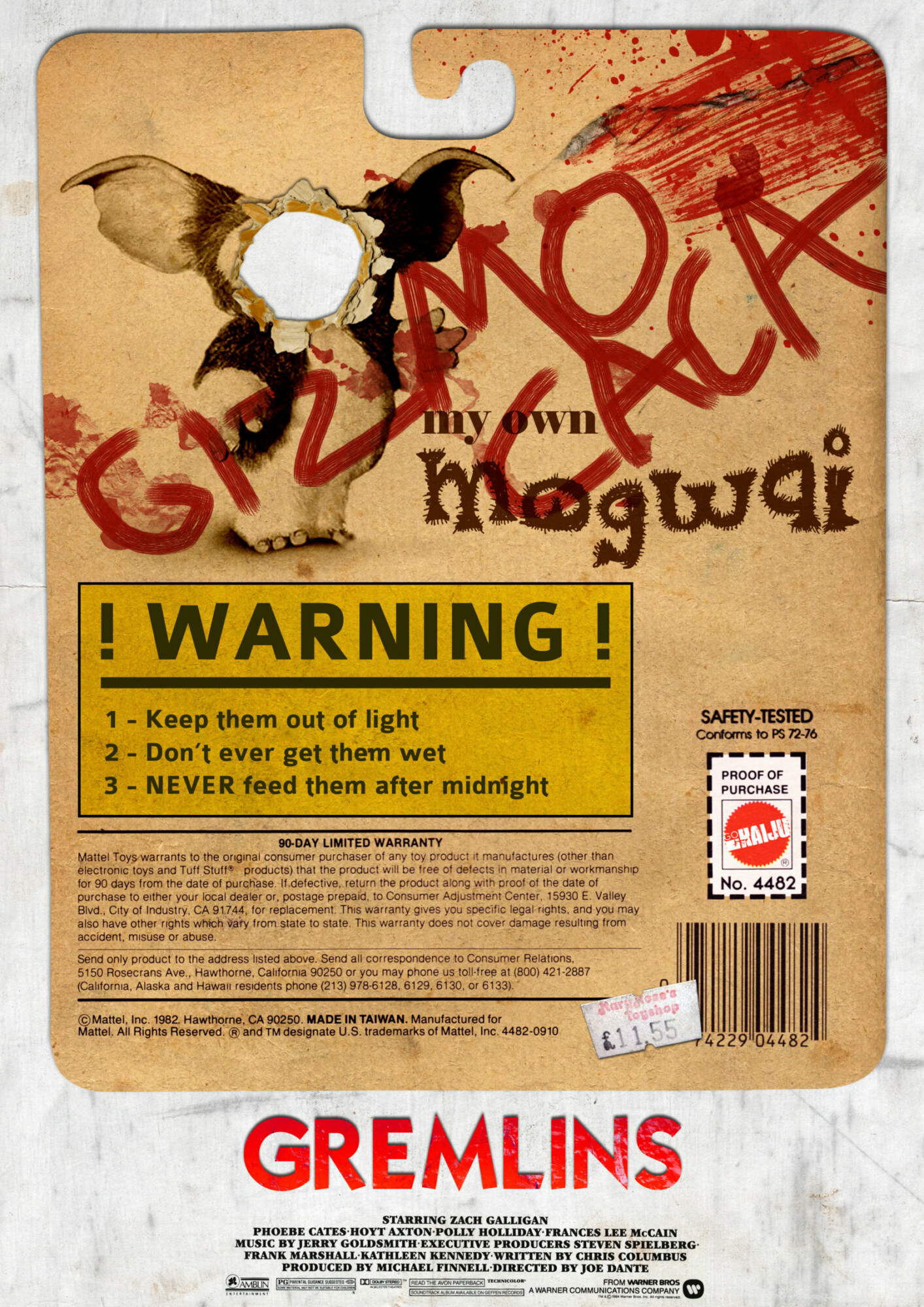 I find it intriguing when a concept from a film is translated into a palpable medium. Like when artists create geographically accurate maps of the islands in Jurassic Park or advertisements for a hover board from Back to the Future Part II. When you know the meaning behind these objects, it captures  everything about what you love about the film. In this case, it looks as if Mogwais came in toy packages, suggested by Danny Pelzer’s father in the film. I enjoy the depth to it; that’s it’s been vandalized and you take in the information on the warning label. There’s so much information to consider and must have been so much fun to design. 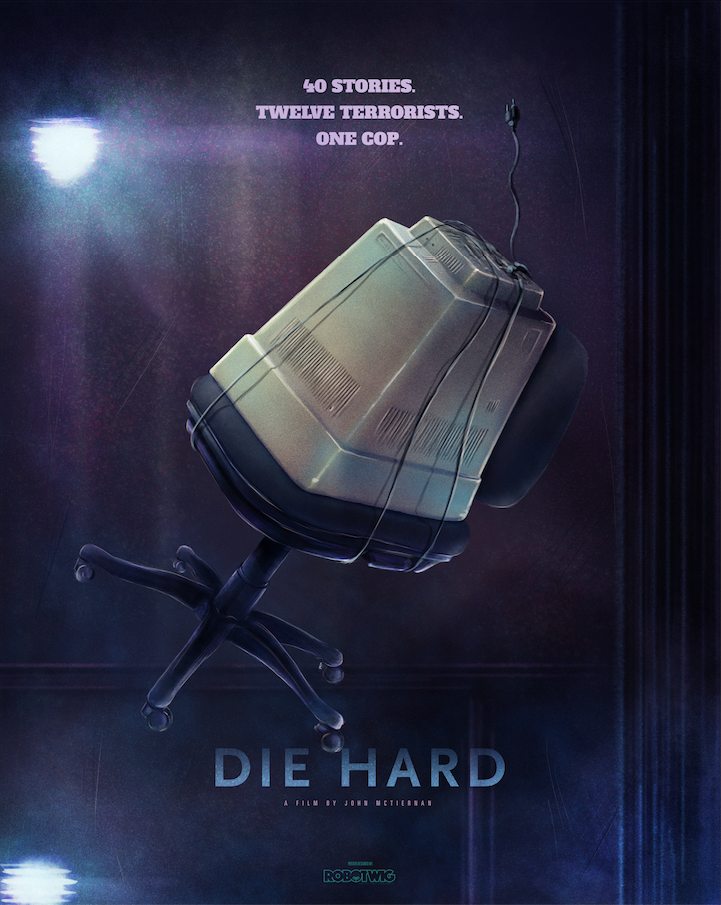 I have an interesting time considering this image. If you’ve seen Die Hard, you’d know there’s C4 strapped between the computer monitor and the office chair. But if you knew nothing about the film and saw this poster, you may assume it’s some sort of outrageous office movie like Office Space, or The Belko Experiment. In either case, I love the idea and it’s a pleasure to have it on this list. 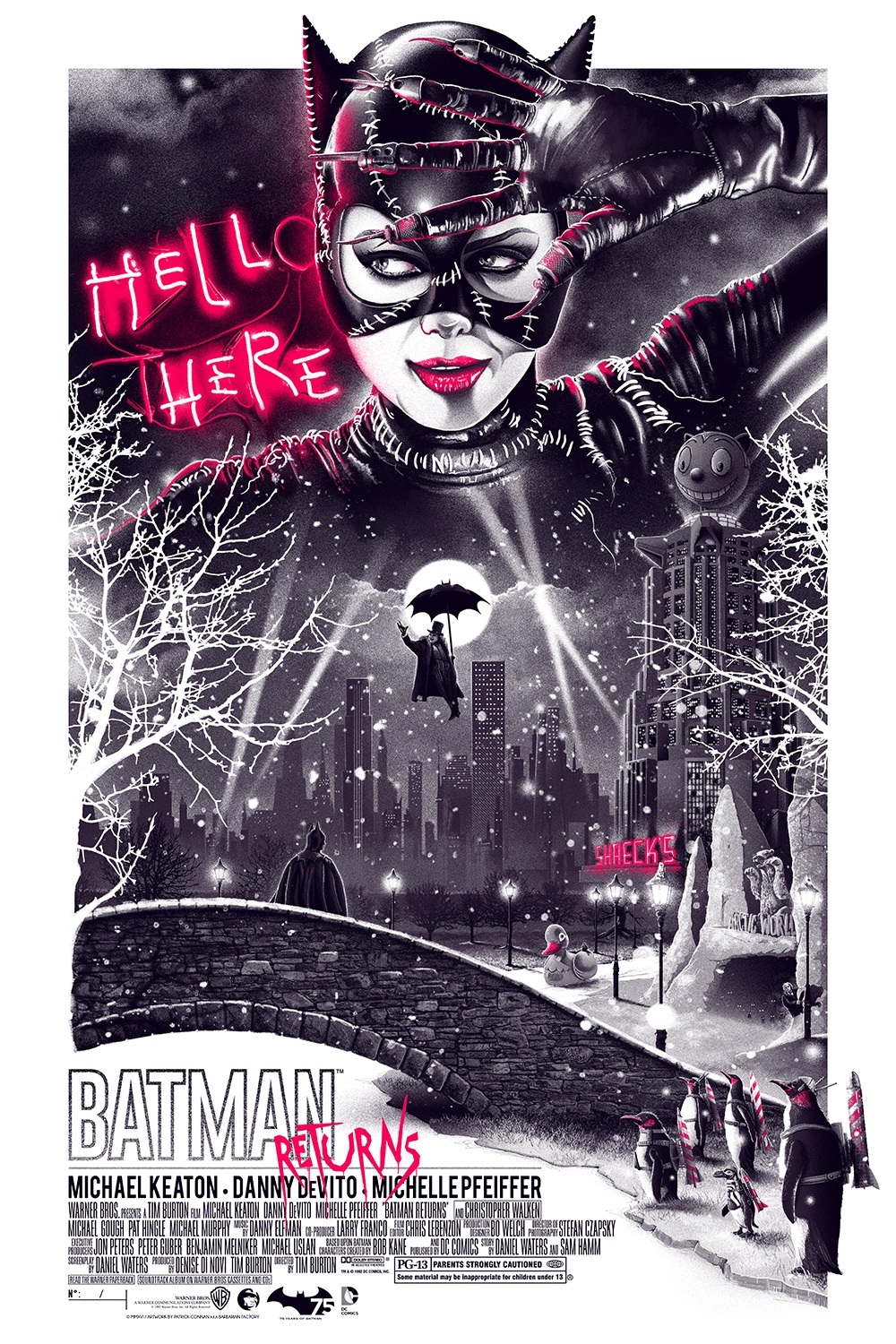 There’s so much compositional skill put into this poster, from the illustration to the title treatment; it all clicks and feels so fresh. We have been so familiar with the original ad campaign for Batman Returns with the old “The Bat. The Cat. The Penguin” imagery, focusing upon the characters, and completely forgetting other elements about the film. And as refreshing as the poster looks, it could totally work in the original campaign in 1992. Aside from the composition, the transitions in value is impeccable. Nothing gets lost and the touches of color are perfectly placed. You’d probably find it weird, but I look forward to watching Batman Returns every Christmas, even though it opens with Pee-wee Herman throwing a baby down a sewer. 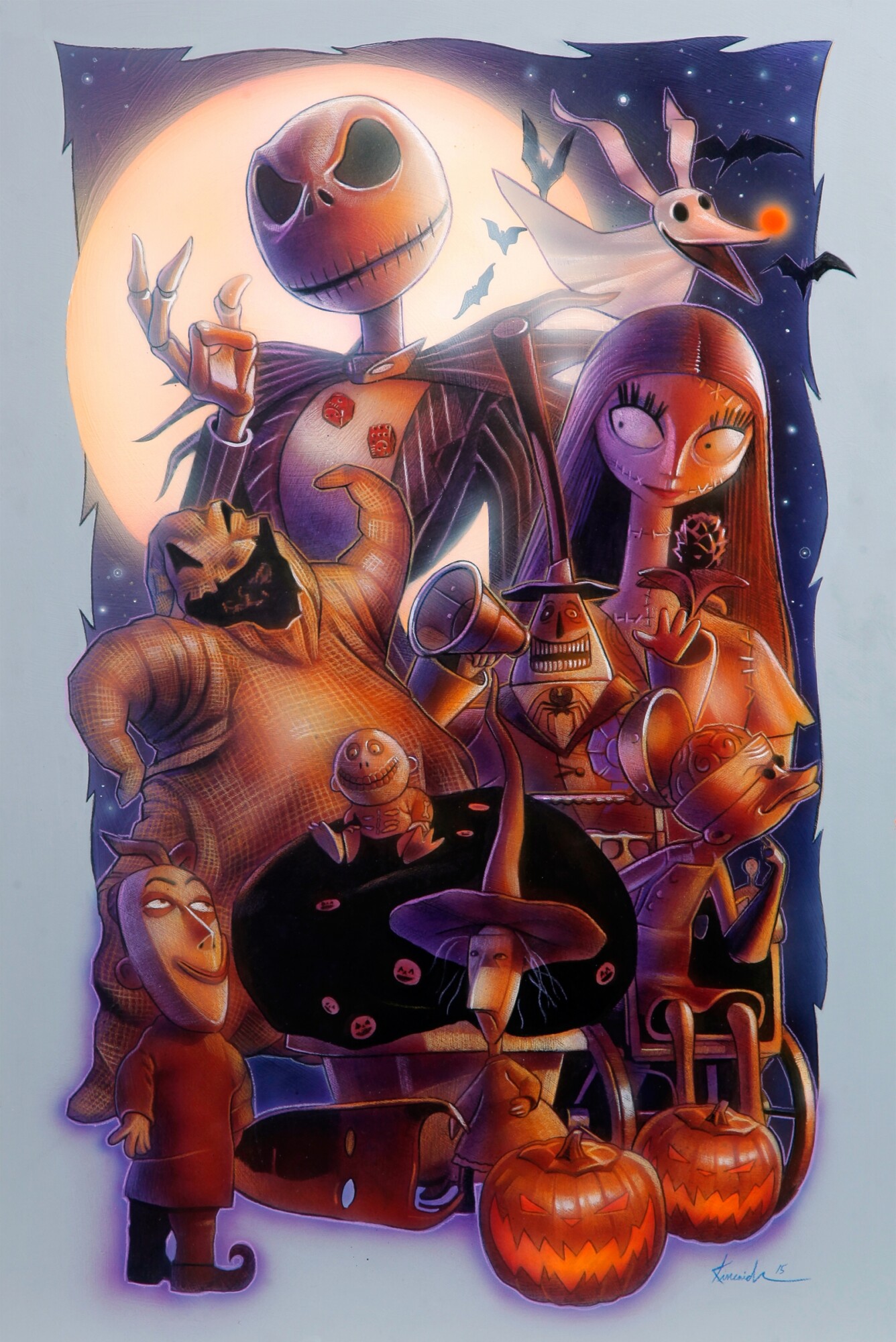 #2- The Nightmare Before Christmas by Jason Kincaid

This poster is a creation out of Drew Struzan’s wheelhouse. The acrylics, the pencil, the composition is all reminiscent of classic Struzan. I would have liked to have seen how the title would play in this composition, but nevertheless, this poster was well designed and executed. Unlike other posters on the list, you can tell this was executed traditionally, making all the elements appear as if they all could all leap off the page. 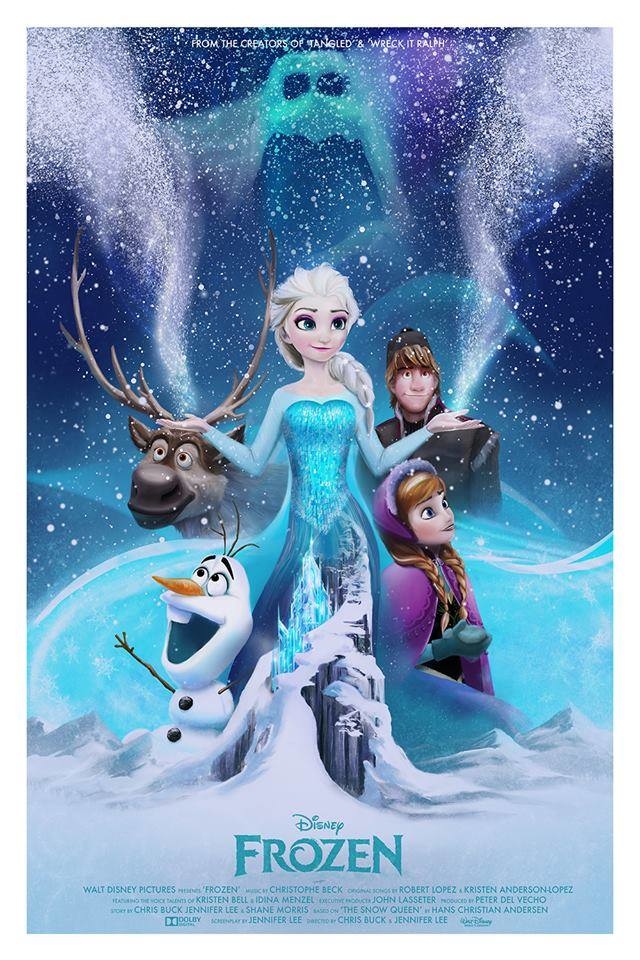 Nothing else on the list looks more official than this poster. I swear I could have seen this in a theater somewhere. The execution and layout works so well and doesn’t feel as collaged as most Disney posters are nowadays; it really feels nostalgic. If you were to compare it to classic Disney posters like The Little Mermaid or The Princes and the Frog, you’d get a sense they were from the same era. This  teaches us that the characters don’t have to inhabit every inch the poster, or be so in-your-face to grab the attention of the little ones passing by. Whimsy isn’t something you encounter as often in a Disney poster, and this reminds me that perhaps they should reconsider.