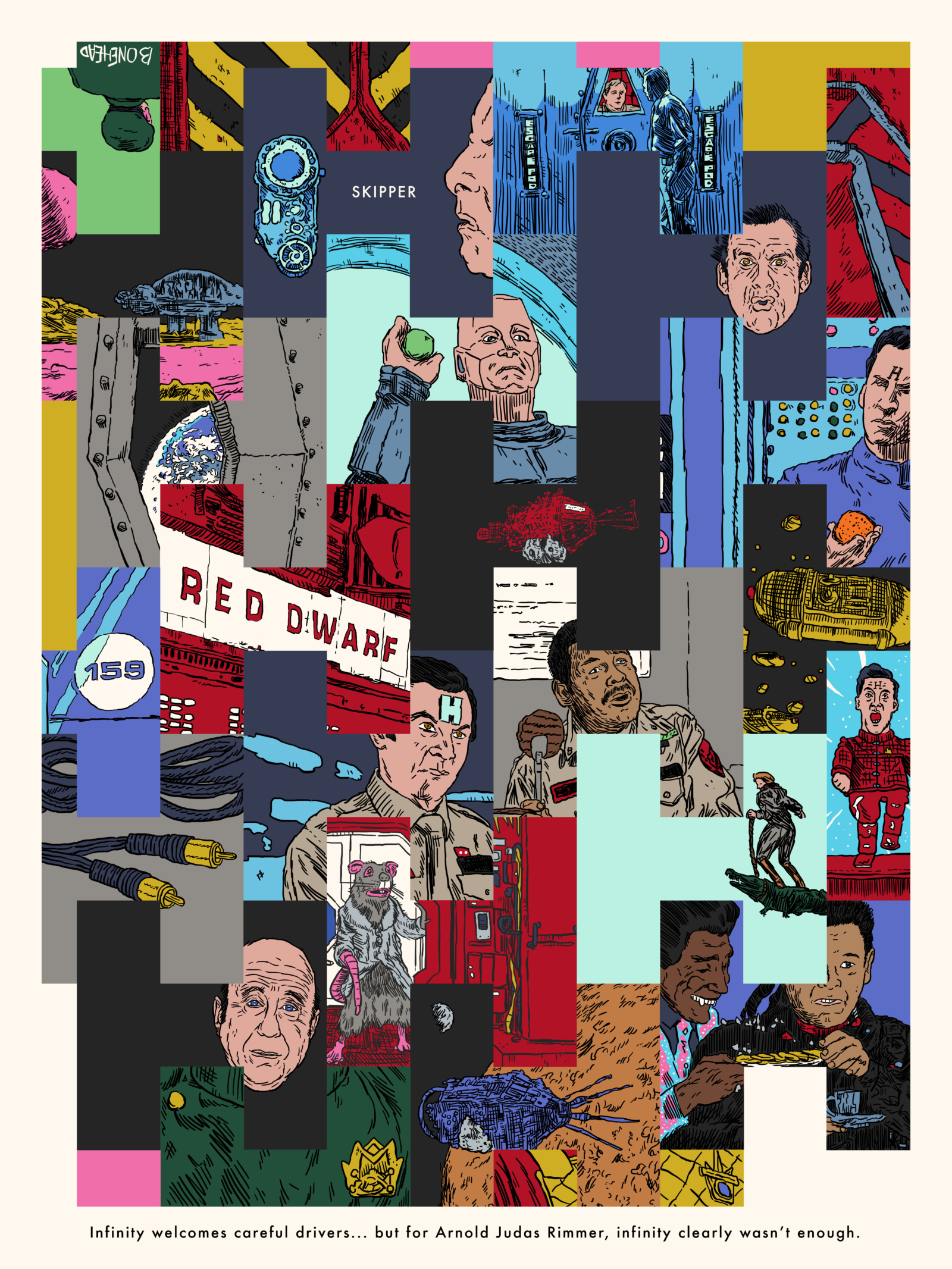 This jam-packed art poster is based on Skipper, the fantastic sixth episode of Red Dwarf XII, in which Rimmer uses a device called a quantum skipper to navigate the multiverse. You know, like Sliders. Remember Sliders? On this cosmic odyssey Rimmer meets different versions of the Red Dwarf crew, allowing for some fan-pleasing cameos including [spoiler alert] Norman Lovett’s Holly and Mac McDonald’s Captain Hollister. It’s so full of wonderful character moments and hilarious stuff, there was no way to choose just a handful of key images. I therefore went to the other extreme… I produced this poster over two days (Friday night and Saturday) by drawing loosely over lots of screen captures of the show. Knowing the layout was absolutely stuffed full of details, I allowed myself about half an hour per tile. Chocolate and tea were my fuel. The overall composition is based on the multiverse concept, in that each illustrated tile forms an uppercase letter H and tessellates with its neighbours, thereby representing the infinite number of parallel dimensions in a Rimmer-flavoured way. I guess I could have just done the same thing with the letter H in different typefaces. That way maybe I’d have gotten around to mowing the lawn. Oh well. I absolutely loved this episode, and I decided as I went along to stretch the concept a little further because in my own head-canon for Red Dwarf, each series is set in a different parallel universe. That’s how I can explain away continuity errors when I’m feeling pedantic. Also, as this episode was Rimmer-centric and featured a montage of unseen universes, it didn’t feel like cheating to include some extra images pertaining to Rimmer’s earlier exploits and other alternate versions of the character familiar to long time fans of the show. To rationalise it another way, these add depth to the illustrative character study. So, if you’re feeling up to it, look out for some sneaky “Easter egg” references to the first Red Dwarf novel and TV episodes such as Dimension Jump, Stoke Me a Clipper, Blue, Rimmer’s green series 3 outfit, and his uniform from Holoship.