NEW PROJECT: Our Bespoke Artwork for Chorus in Partnership with Deep Silver

Back in November, PosterSpy was contacted by the team at Koch Media to produce a series of bespoke artwork for the new sci-fi space combat shooter Chorus, what we didn’t know at the time was the very short deadline of just 3 weeks to get the artwork done!

After a few conversations about the artwork required and the way to make it work, we quickly put up a call to action.

From this call out, over 50 artists from the PosterSpy global community submitted their portfolios to be considered for the project. Together with Koch Media, we narrowed down from the submissions and found our 6 artists, perfect for the job. The artists selected were chosen due to their overall style but also their interest in video games which was evident across their portfolio.

Below are the final pieces of artwork, and we couldn’t be more delighted with how these turned out. The artwork, vision and cooperation from all artists involved was simply brilliant with most delivering artwork before the deadline. 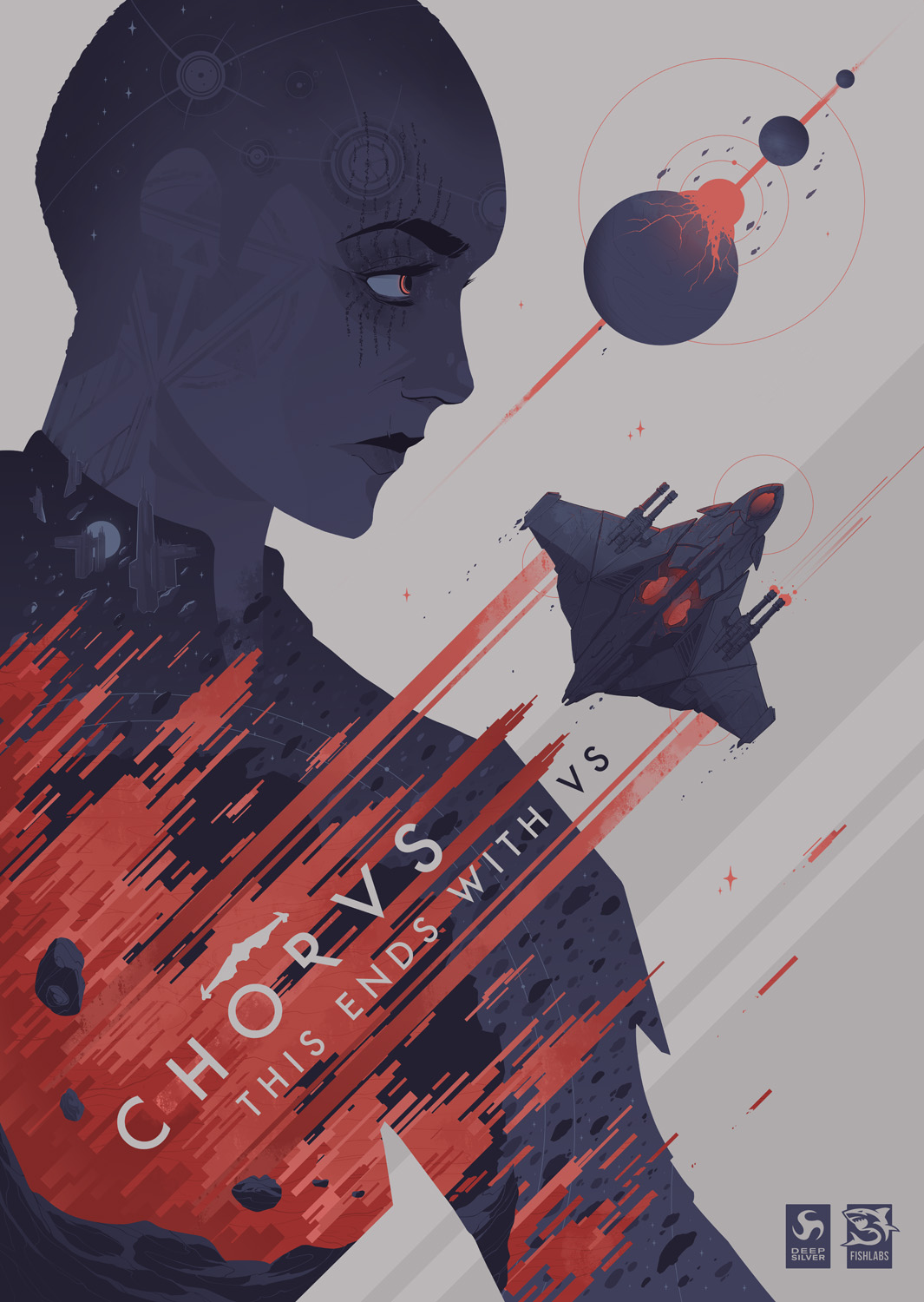 LazareGvimradze
@LazareGvimradze
“As a digital illustrator with a love for science fiction and alternative posters, working on a Chorus piece was immediately interesting, and digging into its background revealed a treasure trove of inspiration points I fed directly into my work. The fully illustrated piece shows Nara’s silhouette, containing all her ties to the Circle, as she strives to break free of her past and exact revenge. This determination is communicated with a diagonal, upwards-pointed composition of the piece, with the Forsaken and the Temple of the Faceless facilitating Nara’s fight, while her guilt over Nimika Prime looms ever-present as her primary driving force.” 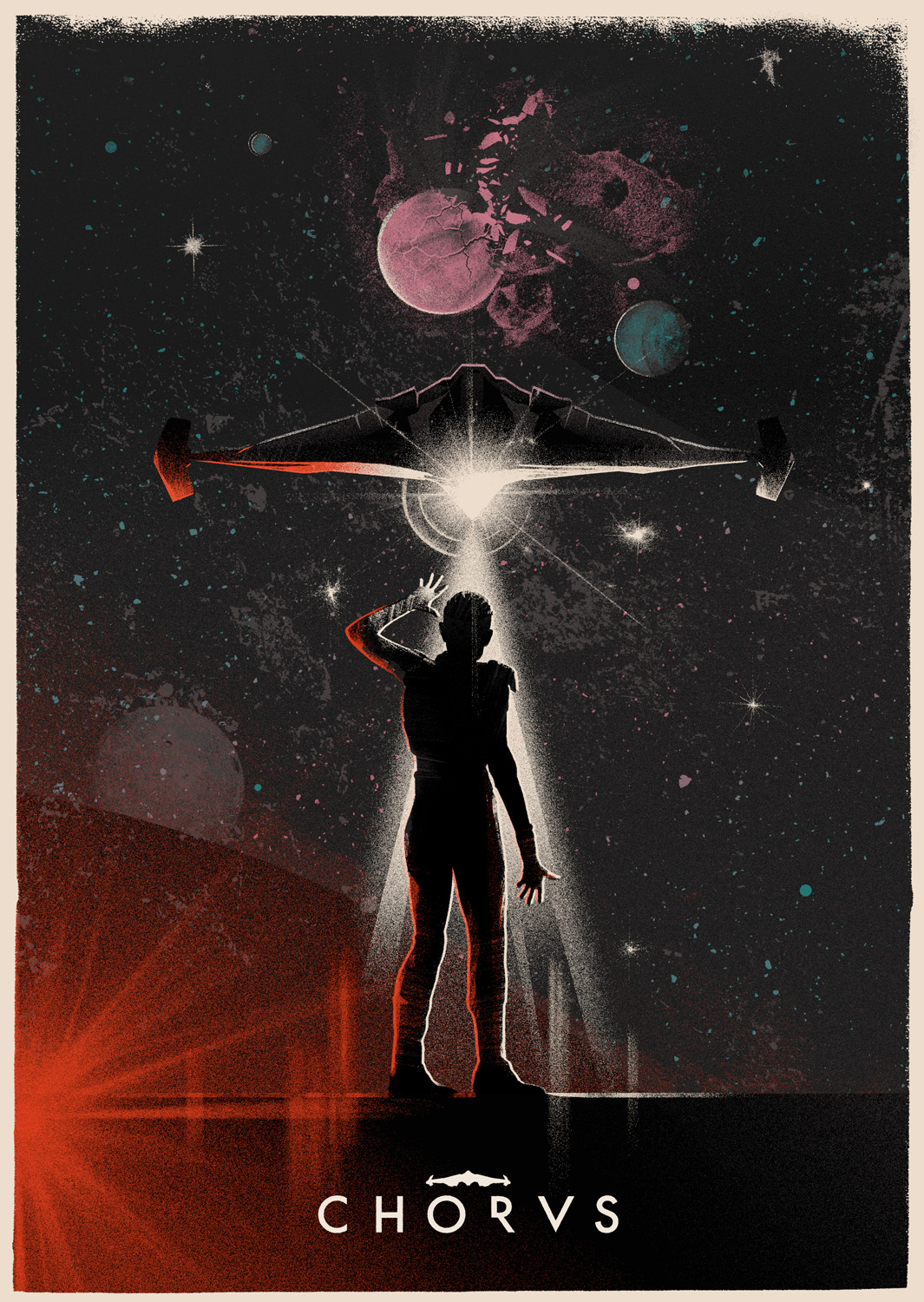 Felix Tindall
@FT_in_NZ
“When approaching the concept, I was inspired by retro sci-fi artwork portrayed in the album and comic book art. During the research and conceptualising phase I was also drawn to a particular shot in the trailer where Nara’s silhouette is being lit up by the floodlights of her ship, the Forsaken. This moment seemed like a pivotal moment in the game so I had the desire to essentially reinterpret it to create a striking composition featuring a space vista in a stylised direction using my familiar techniques of silhouette lighting, colour and graphic texture which seemed like a welcome fit based on the tone and themes I interpreted from the trailer material.” Nick Charge
instagram.com/nickchargeart
“It was very exciting to be among the artists selected to create artwork for Deep Silver and Fishlab’s new game Chorus. I wanted to prominently feature the game’s protagonist Nara as well as her ship, the player-controlled “Forsaken,” in a colourful space setting which would hopefully capture the game’s stunning environments and it’s mix of action and lore driven world building.” 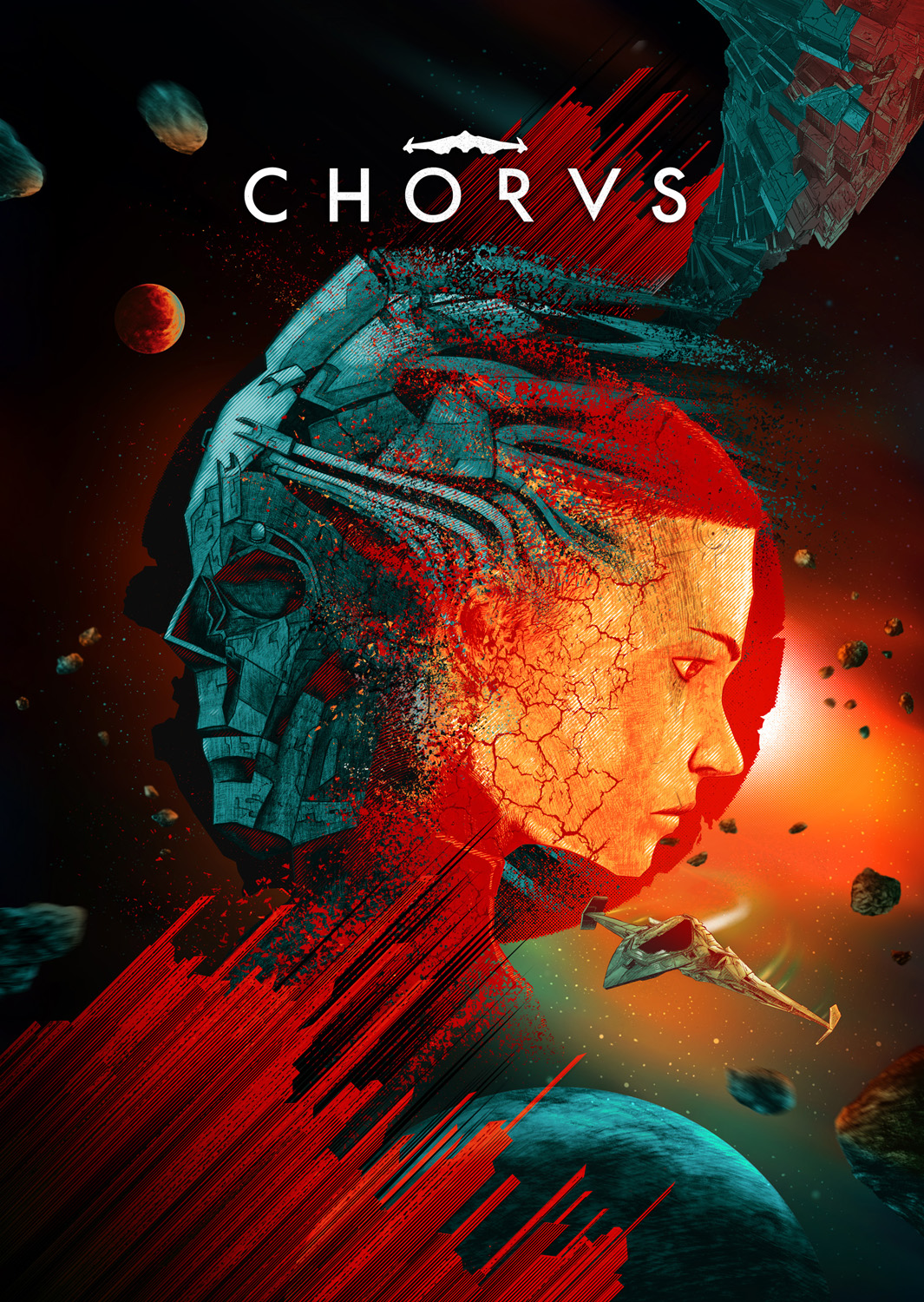 Mark Mones
@b4_abraham
“My creative process starts with conceptual development, thinking of some possible ideas by sketching a rough draft. As a graphic designer by profession, I love to play around with shapes and forms. With the Chorus project, I found it very exciting and at the same time challenging. Exciting because it is the first time for me to design a poster for a game, most of my commissioned projects were movie or tv series posters. Drawing hi-tech visuals like robots, spacecraft is a bit difficult and time-consuming since I draw all of them manually keeping them precise and detailed to their original design.” 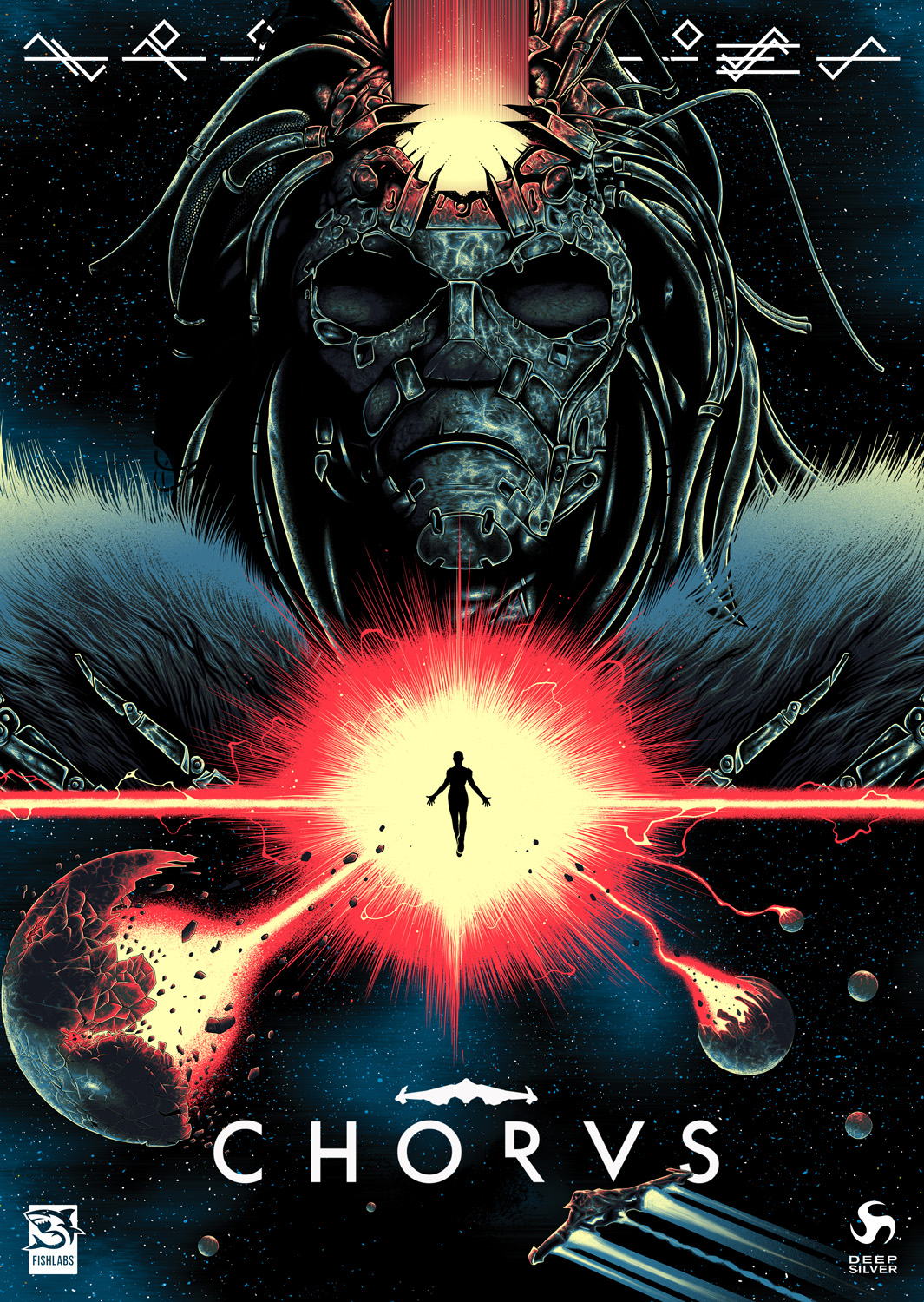 Josh Beamish
instagram.com/joshbeamishart
“Upon receiving the final brief, I immediately knew that I would be packing in a tonne of detail for the ‘The Prophet’ character. I started things off roughing his design out before spending a few layers getting his major lines in and then applying as much detail as possible. After finishing my linework I added in the light burst at the centre and the light source from the top of ‘The Prophets’ head, throwing as many lines as I could in there to create the illusion of an explosion happening from the centre.” 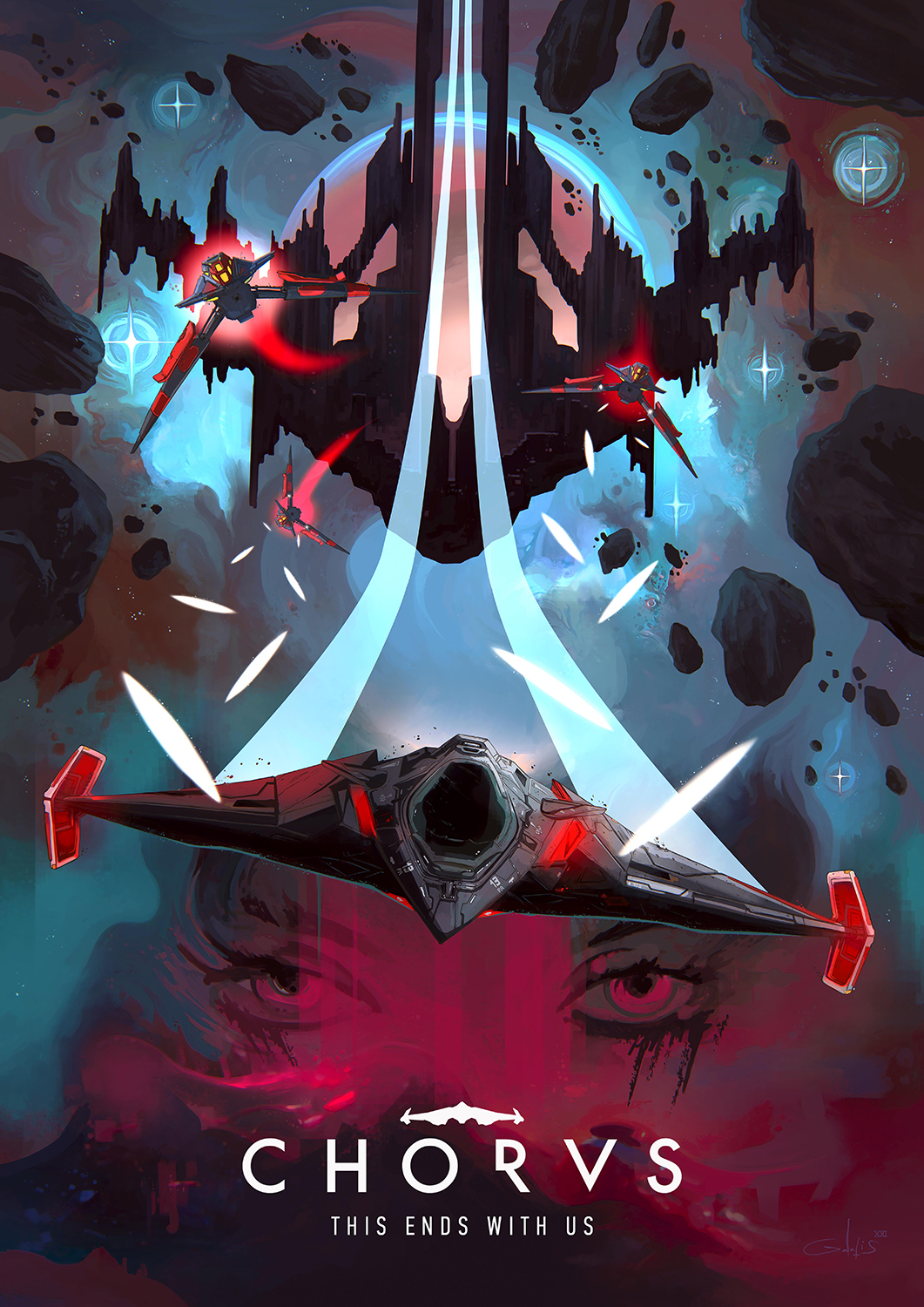 Anthony Galatis
@tonypnd78
“I fell in love instantly with the idea of the strong bond between Nara and Forsaken. You play not just like a starfighter pilot. You are a living weapon unleashing havoc. The challenge for me was to create a poster with high octane dogfight action, showing at the same time the connection between Nara and forsaken. I used a strong triangle layout between the ship pirates chasing Forsaken. Placing him in the spotlight, the eyes of Nara blends with the space underneath, giving a subtle reference to her character. I enjoyed every minute of making this poster. Aviation is my cup of tea! I’m a hardcore flight simulator gamer and air, space combat games. I can’t wait to jump in the Forsaken cockpit. And fly through the dark and mysterious Chorus universe.”

A true evolution of the space-combat shooter, Chorus is the modern pinnacle of a genre that counts classics such as X-Wing and Freespace among its number. Chorus sees you taking control of Nara, once the Circle’s deadliest warriors, now their most wanted fugitive, on a quest to destroy the dark cult that created her. Along with Forsaken, her sentient starfighter, Nara will explore ancient temples, engage in exhilarating zero-g combat, and venture beyond our waking reality.

PosterSpy is a showcase platform for poster artists worldwide and is home to some of the world’s best alternative poster designers focusing on video games, movies and other pop culture references. Here’s the artists themselves describing their work as part of the campaign.